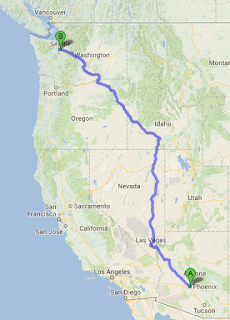 Not since DB Cooper jumped out of an airplane in the American Northwest has there been such focus on a parachute, but for Gary Bettman and the NHL's Board of Governors, the Pacific Northwest may be the next destination for the long running soap opera known as the Phoenix Coyotes.

Comparisons to Cooper's plans of course may be considered by civic officials in Phoenix, where the NHL is suggesting that the dynamic may be about to change in the desert,  unless the Glendale City Council provides "incentives" to the latest individuals who are less than flush with cash, but looking to keep the Coyotes alive.

Should Glendale Council say "not one dime more",  (and with a property  tax increase just approved for Glendale taxpayers who could blame them) then it's most likely going to be a case of,  "well, see ya, wouldn't want to be ya", as the refrain from the Bettman office might go.

Over the weekend, there was a flurry of dispatches from the Seattle area, with the suggestion that discussions have been underway between the NHL and Seattle, which would see the Coyotes relocate to the Emerald city in time for a September start, destined for the much maligned Key Arena, while they await a new downtown arena to be constructed.

Originally, the plan was for Seattle to build that arena for basketball, then perhaps as an additional revenue source, the NHL would come along to share the new facility.

However, Donald Stern once again poked a stick in the eye of Seattle B ball fans, with the NBA voting down a plan to move the Sacramento Kings to Seattle. Putting the new arena plans on a bit of a back burner while the Seattle folks figured out their next move.

So now, should the NHL actually ship the Coyotes to the Pacific Northwest, the Plan B for the moment it seems is rethink the arena proposal using the NHL as the first block and then,  with a new arena in place, pursue that much desired NBA franchise.

As is often the case, NHL Commissioner Gary Bettman is rather cautious in his declarations, not quite proclaiming that the moving vans are on the way, nor it seems throwing cold water on any suggestions that the NHL is Seattle bound.

The rise of the Seattle option will be of particular interest (concern?) to the folks of Quebec and would be franchise holders for a second Toronto franchise, who perhaps might have thought that a ready made franchise, much like the Jets were, would soon be bound for above the 49th parallel.

Many observers suggest that those two locales may one day find their place at the NHL table, however only after a rather expensive expansion fee is delivered to the NHL's Board after the tender for new
franchises is put out.

Seattle it seems may be on the inside track to avoid all of that. To refresh your memories on the prospect of the NHL making tracks for the Pacific Northwest, we invite you to review our look at the Seattle hockey prospects from February of last year.

The latest of media dispatches on the possible shift to Seattle can be found below.

Seattle Times-- NHL's Phoenix Coyotes could move to Seattle if local deal fails
Seattle Post Intelligencer-- Seattle could get NHL team by next season - but don't get your hopes up
KOMO News-- A hockey team for Seattle? New developments unveiled
KING 5-- McGinn acknowledges talks with NHL Commissioner
Globe and Mail-- Seattle on NHL's relocation radar yet again
Toronto Sun-- Seattle already in talks to bring in Coyotes
Posted by . at 3:59 PM

Email ThisBlogThis!Share to TwitterShare to FacebookShare to Pinterest
Labels: Seattle in the NHL June 2013