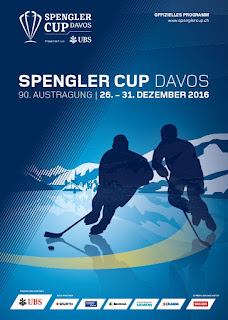 It sometimes gets lost in the Sports shuffle of the holidays, but in recent years Canadians have put some time aside to check out one of the more intriguing of tournament offerings with Spengler Cup play set to start on Boxing Day.

The tourney features professional players on a number of European teams tangling with a team of Canadians grabbed from European rosters and boosted with a few fly ins for tournament time.

Six teams are participating in the Davos based event with Team Canada and the host HC Davos squad to be joined by the KHL's  Avtomobilist Yekaterinburg and Dinamo Minsk, Lugano from the Swiss league and Mountfield from the Czech Extraliga making their first ever Tournament appearance.

The annual Spengler event provides Canadians and Americans a chance to catch up with some of their past favourites with a number of players from both countries carving out a nice living for the end of their careers, or others taking their developing skills to Europe for a little seasoning should the NHL not have a space on a roster for them.

The Team Canada roster was announced on December 20th and with General Manager Sean Burke selecting an interesting mix of players to carry Canada's flag into the tournament fray.

Putting the team through their paces for the tournament will be Head Coach Luke Richardson, Associate Coach Dave King and Gordie Dwyer. Notes on the approach that the three will take at the Davos tournament can be found here.

You can review tournament developments from the two websites below:

The Tournament scoreboard and summaries can be reviewed following daily play from Switzerland.

Pre-Tournament Notes related to the Spengler Cup can be found below:

Americans have Bowl Season to tide them over the holidays, but for Canadians, in addition a strong interest in how the football picture sorts itself out, there is an added diversion as the break between Christmas and New Year's arrives. As Canadians continue to embrace the Boxing Day launch to the World Junior Championships, this year hosted by Montreal and Toronto.

Since the early days of the tournament, it's held a special place in the sports rankings for Canadian fans, drawing large audience for host broadcaster TSN, which devotes much of its assets towards production of what comes close to to two weeks of international puck.

The ten team tournament digs into the ice at 1 PM this afternoon in Montreal, 10 AM for British Columbians just putting the wraps on breakfast and with that start ten days of high tempo Junior hockey takes it's share of the sports highlights packages.

The highly anticipated event provides, stirs the passions of the land that considers itself home to the game and offers up a glimpse at some of the names that will be part of this summer's NHL draft and potentially for many years to come among the member teams of the professional experience.

Tournament play starts in Montreal and for the next ten days you can find Canadians within eyesight of a television set somewhere whenever the team with the Maple Leaf steps out on the ice.

Participating Teams for the 2016-17 World Junior Tournament Include:


You can get a preview of some of the atmosphere for the World Juniors from a range of websites listed below dedicated to the event.

As well, we will post the results of each day at the World Juniors as well as track items of interest over the course of the ten days leading up to the January 5th Championship match.

The World Junior Schedule 2016-17
All Games on TSN

Notes of the Day

Our archive of notes for December