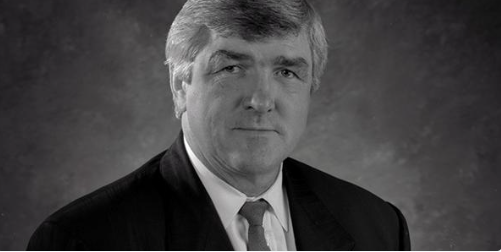 The passing of former player, coach, GM, President and Vancouver icon Pat Quinn was recognized by the Vancouver Canucks on Tuesday evening, with the Canucks holding a moment of silence in honour of the man known as the Big Irishman.

And to reinforce that presence that Quinn carried with him from each and every stop on his NHL and International hockey travels, the Canucks called on Mark Donnelly to provide just the right commemoration of his passing.

A performance of Danny Boy that clearly had an impact on those in Rogers Arena and we imagine for a fair many miles far beyond those arena walls on Tuesday.

There were many tales told of the legend of Pat Quinn over the last forty eight hours, from Vancouver to Toronto, through Philly, LA and beyond, everyone had a story  or memory of one of Canada's most complete hockey men.

For Vancouver fans, perhaps his best moment and there were oh so many, came with his short, no nonsense takedown of a Don Cherry conspiracy theory of the Pavel Bure era, an epic Pat Quinn performance that highlighted flashes of not only his Irish temper but his ability to knock down some of the mightiest of hockey's personalities.

There are of course many, many more such moments, Stanley Cup runs, Olympic games, World Junior tournaments and a number of memories from his playing coaching and managing career.

Perhaps most famously remembered as the guy who nailed Bobby Orr, an incident that to this day can spur on a good discussion or speak a riot depending on where you are visiting at any given point in time.

But, it remains as one of the most iconic of Quinn moments as there was through the ages.

His life beyond his playing days, moved him into the coaching and then the General Manager's office, his seminars both on ice and off, have carried many an NHL star and future executive through the years.

Incredibly, Quinn had not yet been selected to the Hockey Hall of Fame, another glaring error from the selection committee of that place of honour and an oversight that should be remedied with the utmost of haste.

Many of those pupils had nothing but fond remembrances of their time with Pat Quinn, a man whole left an impression with anyone he would meet, whether in hockey or out.

A sample of some of the tributes of respect, admiration and affection for Quinn can be found below, though they truly just scratch the surface of the impact that Pat Quinn had not only on the Canucks but on hockey as well.

Email ThisBlogThis!Share to TwitterShare to FacebookShare to Pinterest
Labels: November 24 2014, Pat Quinn passes away in Vancouver

Email ThisBlogThis!Share to TwitterShare to FacebookShare to Pinterest
Labels: NHL Stars of the Week for November 23

Celebrating the Class of 2014: Hockey's Hall of Fame Inductees

This past week in Toronto, six more names were added to the listing for the Hockey Hall of Fame,  four players who thrilled hockey fans through spectacular careers. A coach who finally received some long overdue recognition and an on ice official who kept the game on its best behaviour during some of its most heated contests.

The Class of 2014 celebrated this week for skills across the board and over the boards shift in and shift out. A listing of six key figures of the modern era, names that few if any would quibble with and most celebrate this week for their achievements and the talents that they brought to the game.

Below we've found a number of items on each, providing a snap shot of their success in a storied NHL career.

Hockey Hall of Fame introduction for the 2014 Induction Celebration

NHL.com-- Voice of Blackhawks puts game before HHOF honour
Chicago Tribune-- Pat Foley on entering the Hockey Hall of Fame
Posted by . at 11:27 PM No comments:

Email ThisBlogThis!Share to TwitterShare to FacebookShare to Pinterest
Labels: 2014 Hall of Fame Inductess 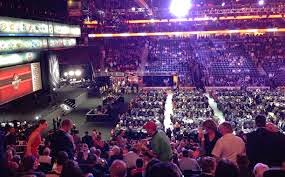 Listings and background items of those players that NHL scouts are keeping their eyes on, tracking where they place on the 2014 depth charts leading up to the June draft.

CSS Preliminary players to watch
Posted by . at 1:40 AM No comments:

Email ThisBlogThis!Share to TwitterShare to FacebookShare to Pinterest
Labels: NHL Stars of the Week for November 16

Email ThisBlogThis!Share to TwitterShare to FacebookShare to Pinterest
Labels: NHL Stars of the week, November 9 2014

An archive of notes on the lead up to the World Junior championships coming up in December.

A look at the preparations that the teams taking part in the tournament to be held in Toronto and Montreal from December 26 to January 5.

Rookie of the Month for October 2014 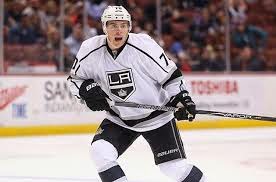 The NHL named their Rookie of the Month for October, with the first award for the 2014-15 season heading to the west coast.

7 goals and and nine points over 11 games in October provided the burst of offence that found Tanner Pearson picking up the accolades for the month.

The review of Pearson's month can be found here.

Our Archive of the Monthly and weekly awards winners can be found here.
Posted by . at 1:31 AM No comments:

Email ThisBlogThis!Share to TwitterShare to FacebookShare to Pinterest
Labels: Player of the Month for October

NHL Stars of the Month for October 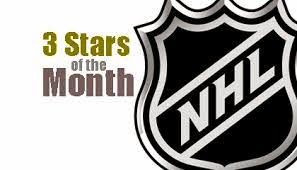 With one month knocked off the NHL calendar, the NHL named their three Stars of the Month for October.

Email ThisBlogThis!Share to TwitterShare to FacebookShare to Pinterest
Labels: NHL Stars of the Month for October 2014

Three stars item for November 2, from NHL.com
Posted by . at 1:24 AM No comments:

Email ThisBlogThis!Share to TwitterShare to FacebookShare to Pinterest
Labels: NHL Stars of the week, November 3 2014

Bruins get some High Profile support for the season ahead 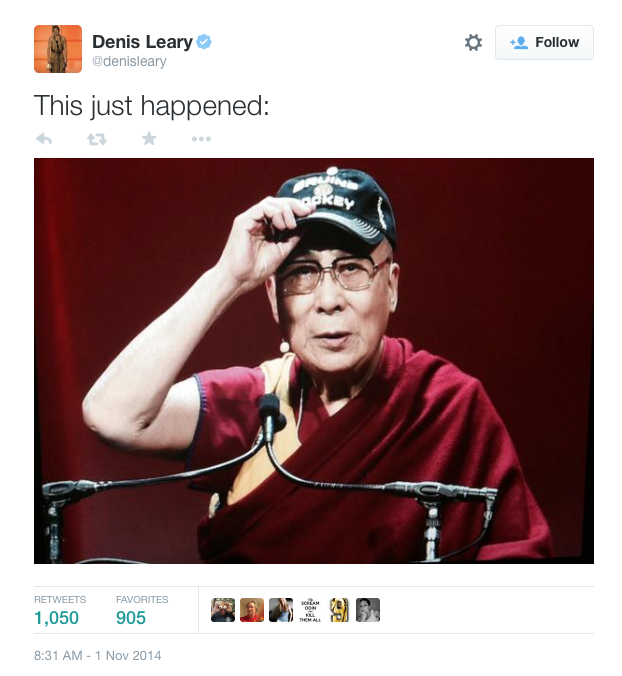 The Boston Bruin's won Sunday and they didn't even take to the ice.

The Dalai Lama, visiting Boston for a speaking engagement on Sunday pulled on a Boston Bruins hat, pretty well ensuring that the faithful of Boston (both of the Dalai Lama and the Bruins) had yet one more reason to listen intently to the lessons to come.

His Holiness has been on a North American tour in recent weeks, though the only NHL city visited thus far was Vancouver, which perhaps finds itself wishing that someone had been a little quicker on the mark.

The Dali Lama is off to New York City next, though we imagine that his advisers will suggest he keep the Bruins hat in the suitcase for the next few days.

Denis Leary was the first to spread the word of the Dalai Lama's fashion selection for the day, taking to twitter (see left) quickly to make sure that all were informed.

Bob McKenzie of TSN was fairly quick to bring Mr. Leary back down to ice level, providing his own photo collection as evidence that the Dalai Lama plays no favourites when it comes to his North American travels, while at the same time McKenzie suggested that perhaps the Bruins were a little parsimonious in the memorabilia department. 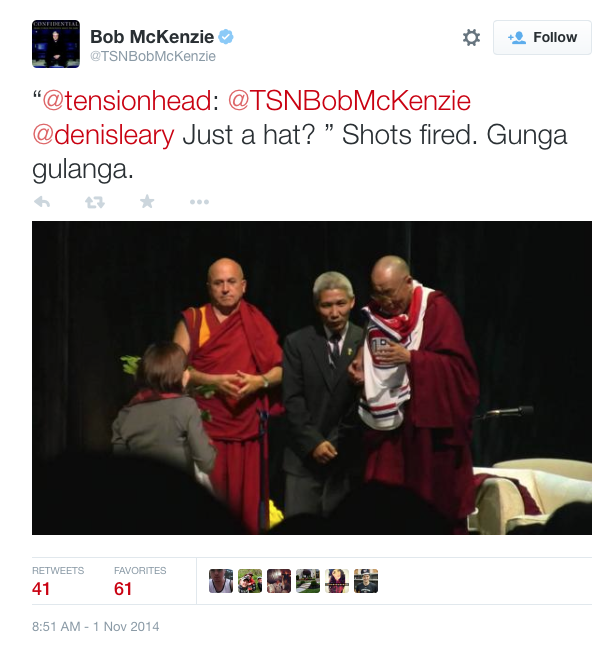 Still, the Bruins success in the divine intervention front on Sunday, clearly sets the bar high for other NHL franchises and with only so many religious leaders out there to offer up a similar hint of team loyalty, we imagine some of the other NHL teams are already sending off their ambassadors.

Montreal will now have to expand their own roster of the divine, perhaps to seek out the Pope, while Toronto may be looking to the head of the Church of England, the Queen to pull on a Maple Leafs journey at some future event.

Then there's the leaders of Islam, Judaism, Hinduism, Sikhism, Buddhism (other than the Tibet version) and the Greek and Ukrainian Orthodox Churches to seek out to name a few, a fairly comprehensive list for the NHL teams to divvy up can be found here.

And while teams that are struggling out of the gate may need more immediate help, some teams perhaps may hold off on their approaches until the playoff push.

We're not sure where LA may fall into the whole quest for a boost, though we imagine a few of the fans in the stands will offer up Scientology as a natural fit. Particularly when you consider the number of celebrities that are members and make the occasional appearance at the Staples Centre.

Still, those who are first prosper the most, and Boston, can take to the ice with serene confidence this week, knowing that the His Holiness the 14th Dalai Lama is ready to go into the corners with them.
Posted by . at 11:23 PM No comments:

Our Archive for the month of November