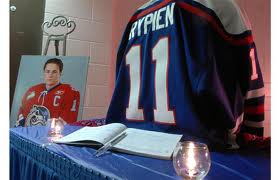 "But if Rypien’s story can compel one person to seek help; if it can put a human face to this debilitating disease, then, maybe, some value can come of this." -- A heartfelt observation from Vancouver Province writer Ed Willes, who captures the sense of disbelief in Vancouver and across the NHL over the passing of Rick Rypien.

The Vancouver Canucks organization, like much of the hockey world in North America was shocked to hear of the passing of Rick Rypien, the reserved one time Canuck was a popular player with his team mates and a fan favourite and yet despite that respect and admiration, he battled demons that eventually took hold and left us all asking the question we always do when the inexplicable happens, why?

Towards an answer to that question, the Vancouver Canucks will apparently take the lead, ready to talk about a subject that far too often gets sidestepped, depression and its impact on not only hockey players but all segments of our society.

Ed Willes of the Vancouver Province and Iain Macintyre have both put together illuminating columns for us on how depression ebbs and flows and how it can impact on our everyday lives.

How one day a player could seem to be ready to have a long and rewarding NHL career, only to have everything turn on its head a day later.

Their articles, are two of many in the last ten days that have tried to come to terms with the events of mid August, seeking to offer some sense of where to go from here.

Bruce Arthur at the National Post also provided an informative piece in the shocked period that the  word of Rypien's passing first came, asking questions that need to be asked in the wake of the recent passing of young hockey players, who left us far too soon.

The three articles cited above and many others are instructive for all and offer up much to think about, how we need to deal with the issue of depression, how we should not stigmatize those afflicted by it, but offer help and compassion.  Seeking to understand a disease and what it can do to a person, sometimes resulting in terrible decisions and outcomes that end only in sadness and mourning for many who feel helpless.

There are many issues that like all of us NHL players face through their careers and beyond,  all NHL teams as well as league and union officials should resolve to better understand those issues, and offer up a more proactive health plan for their players of today and on into retirement.

Fans as well need to realize that far beyond the boards life can be a challenge for those that entertain us on a nightly basis, while we celebrate their achievements and actions on the ice, there are items of concern to note long after the cheers and applause have faded.

When players such as Rick Rypien pass on, it brings home the message that life is a complicated thing and fame and fortune sometimes are facades to real human frailties. Like all of us, they face these things on a daily basis, and you can only hope that the signs are noted and the help made available whenever required.

As Willes wrote in his article today, The Canucks and more to the point General Manager Mike Gillis hope to shed some light on one of those life conditions,  hopeful that their message will  counsel those that need help, to seek it out.

The link to the Willes article can be found here, the Macintyre offering here,  they are both well worth a read, offering up some insight to a subject that few of us ever wish to discuss, knocking down a wall that needs to be knocked down.

Email ThisBlogThis!Share to TwitterShare to FacebookShare to Pinterest
Labels: The passing of Rick Rypien

Brendan Shanahan dons his white coat this week, ready to tinker, tweak and study the results to come as the NHL embarks on its annual pre-season study as to what may improve the game for player and fan alike.

The NHL's research, development and orientation camp gets underway at the MasterCard Centre for Hockey Excellence (There are some things that money can't buy. For Everything else, including game changing decisions, there's Mastercard?) a two day examination and testing range where all sorts of modifications will be tested out, though there's no guarantee that they'll ever make it to a rink near you.

Thirty players, top prospects for the 2012 NHL entry draft will provide some of the guinea pig moments, the most intriguing item and the one that some suggest has the best chance of becoming adopted is a hybrid icing rule, which will put the linesmen in the position to call or waive off icing calls and the race for the puck, an exciting but sometimes dangerous part of the game that can result in injury.

It has the stamp of approval of Leafs GM Brian Burke, who is also championing another change, which will see defacement to wrap up opposing players in their arms when within two metres of the boards, the "bear hug rule" would allow the defenceman then to guide the forward into the boards, hopefully eliminating the current dangerous situation of players getting slammed into the boards when most vulnerable.

NHL officials also are looking at a crossover rule from Lacrosse, a rectangular box on the ice in front of the players benches to make things easier on the officials when it comes to deciding too many men on the ice calls during on the fly changes.  Changes will only be allowed when players are within that rectangular area and it's hoped that will reduce the number of too many men calls that slow down the game.

Those are some of the highlights, there are many, many others most of which will return to the lab for tinkering or to be put far back on an upper shelf, never to be seen again.

A full review (and a bit of satire) as to what the NHL plans to look over can be found below.In some cases a preview of what may be coming to the NHL in seasons to come in others, well lets just say there's probably a bit of work to be done by Professor Shanahan just yet. 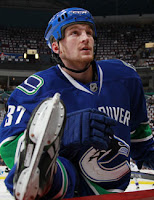 The news out of Alberta on Monday night came unexpected, word that Rick Rypien had passed away at his Alberta home at the far too early age of 27 .

A death described by the RCMP as deemed sudden, not suspicious, but one that has left a good number of NHL followers a little bit shocked.

His passing brings to a close the life of a player, who played with much heart, punched above his weight as they say and seemingly touched many lives in his career, all while suffering through some personal demons that sadly perhaps may have contributed to the news of today.

Rypien was always a crowd favourite, whether in Vancouver where fans, team mates and management mourned the news of his passing or in Winnipeg, the city he was destined for in September having recently signed a contract with the relocated Jets, a return to the city that embraced him through his career in the NHl, where he toiled for the farm club of the Canucks the Manitoba Moose.

Such was his status in Winnipeg, that the Jets were quick to seek out his services upon their relocation to the Manitoba capital, his relationship with the Moose management which now runs the Jets so close that they felt as though they were welcoming a son back home.

The possibility of a more rewarding time in the NHL for Rypien in Winnipeg, led many to believe that he had finally turned a corner with his personal issues, the prospect of playing in front of the Winnipeg fans again reportedly something that the centre was looking forward to.

Thus the shock over the announcements out of both the Jets and Canucks camps over his passing.

In Vancouver, fans gathered to erect a makeshift memorial to the former Canuck, indicative as to the impact that he had on the fans.

Likewise, the testimonials have begun to come in, from former team mates and NHL, AHL and juniors officials who had spent time with him over the years,  all wishing that the news were not true and that somehow time could turn back to a better place for Rick Rypien.

Some of the items of note that have made their way across the NHL telegraph lines can be found below.

Post concussed Sidney Crosby, may not be ready for training camp

While he's been busy in the off season stocking shelves at the television version of Sportchek (a telegenic presence on your screen regularly this summer it seems), when it comes to heading off to the Penguins training camp next month, it may be that Sidney isn't quite ready for prime time just yet.

A report in the National Post today, suggests that the indications are that the Penguins star and the NHL's main marquee attraction may not be ready for the rigours of a September training camp,  words that should put Gary Bettman on notice that perhaps it's time to take the issue of concussion much, much more seriously.

Crosby last played a game in the NHL on January 5, the victim of two consecutive hits to the head, one of which was in the New Years Day showcase event on North American television.

Since the diagnosis of his concussed status, Crosby effectively shut down his season and now, seven months later, he seems no closer to returning to the ice than he did the day his injury was disclosed.

For a league which needs star power, having the league's centre piece on the shelf isn't going to help to grow the game, the lengthy absence of Crosby from the NHL scene, should serve as a warning to all the league's GM's of the need to protect the most important aspect of their operations, that being the players who play the game.

Hockey fans, while no doubt thrilled to see Mr. Crosby's acting and marketing skills on display on their television sets during the football season, must be wondering if they'll have a chance to see his hockey skills on their sets when the season starts in October.

If the news leaking out today is any indication, disappointment may be ours when he puck drops for real in the fall.

Update:  Stop the presses as they used to say, seems that the Penguins (perhaps a little concerned about the optics of their star player not having a timetable for return and all that) have rebutted the initial reports of the day,  and suggest that Crosby is moving forward in his training, apparently currently taking place in Halifax.