Solidarity Forev, er, a little while... 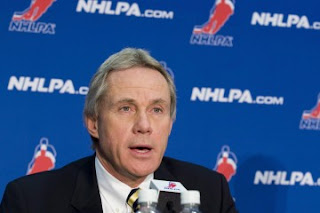 "It was a question of Paul Kelly being around [22] months and still not being able to build the trust and confidence in the office or with the executive, and that he was the guy to continue on in this role"-- NHLPA ombudsman (temporary) Buzz Hargrove offering up a thought on why Paul Kelly, former Executive Director of the NHLPA is unemployed today

If the NHLPA were a company, you might be advised to think twice before you sent them a resume.

For the second time in a few short years and the third time in the last four, the NHLPA is seeking out a new director for its collective.

In a palace coup of surprising swiftness, Paul Kelly the highly touted replacement for Ted Saskin, he the recipient of the title after disechantment with Bob Goodenow's efforts, was unceremoniously discharged from his duties this weekend.

Buzz Hargrove, the long time organizer and leader of the Canadian Auto Workers appears to be in the centre of the controversy as is Eric Lindros, the former thorn in the side to NHL General Managers has apparently reprised that role in the drag em in, bare knuckle politics of union leadership.

Hargrove who most recently replaced Lindros as the association's ombudsman, appears to have been the conduit of discontent between some factions of the association (ie: those who lost out to Kelly in the last coup) and the membership as a whole, which took the most unusual step of replacing their director just as the association prepares to enter into a pivotal year of negotiations with the NHL leading up to talks on a new CBA for 2011.

Chris Chelios, never one to shy away from a discussion, offered up some cryptic thoughts about Kelly's peformance in office, "We are potentially only two seasons away from the expiration of the CBA and we feel now is the best time to make a move to ensure that we have optimal leadership in place to improve and protect our members' rights in the collective bargaining agreement," .
.
Words that seem a far cry from his thoughts back when Mr. Kelly was hired, an event which found Chelios rather impressed with, "His resume is beyond impressive and he is passionate about protecting our best interests. We are excited about what awaits us going forward.”

It would appear that things certainly can change in less than two years!

With Kelly getting cashiered as Sunday night merged into Monday morning, reports have it that another member of the executive Pat Flatley quit, many wonder if Glen Healey may not be quick to join the exodus, considering his past words of support of Kelly's leadership over the last year and a half.

Considering the sideshow impression that many are left with when it comes to the NHL ownership and management participants, having the player's association exhibit the same kind of eat the young mentality of their partners/opponents does provide for no shortage of entertainment.

Though it makes you wonder if anyone associated with the NHL these days, management or labour, really has a clue as to what they are doing. 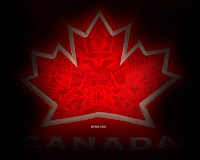 The calendar may say August, but for 46 prospective Olympians it may as well be a frosty night in February.

Team Canada opened up its orientation camp on Monday, a chance for the invited to get their first look at the four day adventure that could result in a place on Canada's Olympic Hockey team come next years Olympic games in Vancouver.

The 46 were almost on the ice as soon as they had finished their introductions at the rink, such was the pace that Head Coach Mike Babcock introduced to the four day sessions.

Team Canada GM Steve Yzerman and his management group will be watching with interest to see how the 46 mesh together, trying to divine which members will have the most impact for a February roster position, of the 46 gathered in Calgary on Monday some twenty of them will find disappointment in the end, as Yzerman puts together the combination of 23 that he feels will best deliver Gold to Canada at GM Place.

It's an interesting mix of veterans and rising stars, scoring specialists and hard nosed pluggers that made the invitation list, some there to provide the competitive spirit and game face atmosphere, others hoping that somehow they provide a spark that catches the eyes of Yzerman et al and make for that surprise announcement that may make hockey history.

It being hockey and Olympic hockey at that, the simple process of an opening skate seems to have been covered as if it were game seven of the Stanley Cup final.

Some of the reviews, previews and prognostications as to who will survive this stay on the Babcock Ice flow can be found below. 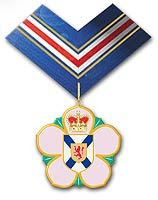 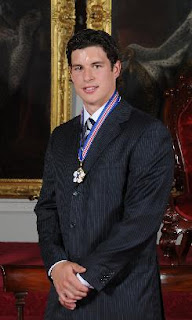 "I'm proud to say I'm from here and Cole Harbour, so it means a lot to be recognized like this"-- Sidney Crosby, on the occassion of the awarding of the Order of Nova Scotia...

He's been named an outstanding player, most valuable player, leading scorer and now can add Member of the Order to his resume.

Sidney Crosby, former resident of Cole Harbour, Nova Scotia was honoured by the home province on Tuesday as he received his Order of Nova Scotia medal, finally able to mesh his schedule with that of official Nova Scotia.

Crosby received his honours in a special ceremony at Nova Scotia's Government House, as he accepted the medal of honour from Lieut.-Gov. Mayann Francis, as his family looked on, accompanied by a number of Nova Scotia politicians and a large crowd of Government House and Nova Scotia legislative workers, many of whom recorded the event on their personal cameras.

He now becomes the youngest resident ever in Nova Scotia to so be honoured by the province, a natural one imagines, considering he was also the youngest captain ever named to an NHL team.
.
The honour caps a pretty special few weeks for Crosby back in his home province, he recently brought the Stanley Cup to Cole Harbour, where crowds over 10,000 strong gathered to offer their congratulations and share in the moment, not to mention gaze at the Holy Grail of Canadian sport.

Good enough for Forbes, not so for the NHL!

If Gary Bettman, Bill Daly, or any other worker drone in the NHL office phones up on a cold call seeking to advise you on your Mutual Fund, it may be wise to just hang up.
As the Jim Balsillie/Gary Bettman et al feud prepares for its next round of court room drama, Tuesday brought an interesting review from the Financial bible known as Forbes, which identified RIM as one of the top performers in the current economic climate.

The review from Forbes is interesting in that the man behind the RIM phenomenen is of course Jim Balsillie, the current scourge of the NHL and a man which all of its member executives considers to be of poor character.

Clearly, the brains behind the NHL have some inside information eh, what with their pronouncement of Balsillies' unworthiness, while having selected past participants to the lodge who have found themselves on the wrong side of the penal system in recent years.

While the NHL's chosen ones were busy lining up criminal lawyers, Balsillie over at RIM headquarters was just lining up contract after contract, invention after invention, leading his company to a top ten finish in the rankings of Forbes, one of two Canadian companies to so be honoured.

Yet despite his corporate savvy, the success of his business plans and the spectacular growth and platform that his main industry provides, the NHL in their long term vision feel he's just not the kind of guy that they want to associate with.

Compared to his efforts in the business world, many of his would be partners, based on some of their recent league decisions, are hardly the timbre of corporate credibility.

Should they have to rub elbows with someone who clearly has found the path to success, one wonders what would be left of their incredible egos and lack of vision.

Over achievers it would appear have no place at the NHL roundtable...

Email ThisBlogThis!Share to TwitterShare to FacebookShare to Pinterest
Labels: Balsillie for Forbes, but not the NHL

If they play as sharp as they look, Team Canada could be unbeatable 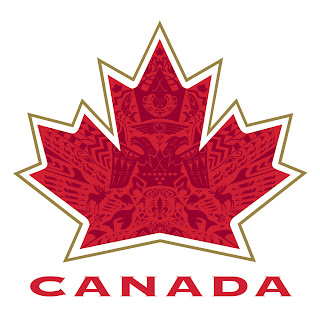 Hockey Canada released their fashion line for 2010, a sharp new look for Canada's three competing hockey squads at the 2010 Olympics in Vancouver.
The home side will feature a uniform featuring a crest that depicts much of what the nation is all about, from eagles to Thunderbirds, to Maple Leafs and Fleur de Lys, the fabric of the nation is pulled together in the fabric of the red and white uniforms. (Click on the Logo above for close up of the uniform crest)
.
The uniform revealing brings to an end a rather contentious period of time for Hockey Canada which was forced to relinquish its traditional logo of the stylized Canadian Hockey player, owing to Olympic revisions to their uniform rules.
.
The resulting change is one that will more than likely meet with much approval from all sides.
The uniform was created by Vancouver based designer Debra Sparrow of the Musqueam First Nation and brings in a well balance mixture of First Nation designs intertwined with the traditional aspects of Canadian hockey uniforms of the past.
The highlight of the uniform features a vivid Red Maple Leaf with smaller Maple Leaf designs imprinted on the main logo, each depicting a gold medal victory as well as other designs. The official and replica versions will be manufactured by Nike.
The uniform will feature both a red and a white version, both of which are available for those Team Canada supporters that want to get ahead of the crowd when it comes to their fashion sense for 2010...
.
National Post-- Hockey Canada unveils new Olympic jerseys
National Post-- An inspirational effort
Vancouver Province-- Hockey Canada unveils new Olympic jerseys
Toronto Star/CP-- Hockey Canada unveils Olympic jerseys
Globe and Mail-- A hockey nation's uniform
Globe and Mail-- Canada’s new sweater expected to sell, regardless of design
Posted by . at 12:31 AM No comments:

Tracking the daily headlines for the month of August.