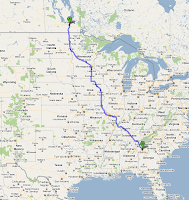 Guess who just got back today?
Those wild eyed boys that've been away
Haven't changed, haven't much to say
But man I still think them cats are crazy
They were askin' if you were around
How you was, where you could be found
Told 'em you were liven' downtown
Driving all the old men crazy

.
When Phil Lynott and the boyos of Thin Lizzy put together their hugely successful little ditty in the mid seventies, who knew that some thirty five years later it could have been taken as the theme song for Winnipeg's NHL rebirth.

But here we were watching along with a large number of our hockey addicted brothers and sisters today as the NHL made their return to the Manitoba capital (subject of course to the official key dokey from the Board of Governors on June 21st),  finding a large number of NHL devotees downtown, going just a little bit crazy.

The path back to the NHL took fifteen years and at one point almost saw the wandering dogs of the desert become the ones to make the migration back north, only it seems the rather generous nature of Glendale's elected officials kept the Coyotes from the Back to the Future machine, so instead it was a march on Atlanta that brought the NHL back home.

The Atlanta factor, while perhaps the background plan all along, seemed to pop up suddenly, the window of escape for the Atlanta spirit group cracked open by the machinations of the NHL in Arizona.

There were of a course a few potential setbacks for Manitoba hockey fans in the last month, there was the appearance of a would be investor known mysteriously as "the Balkan", a stalking horse that seemingly was set to purchase the Thrashers and keep them in Atlanta.  Though in the end "the Balkan" seemed to be more the thing of legend, somewhat like the legend of Keyser Soze from the Usual Suspects, who was much feared, but seldom seen. In the end, not much seemed to come from the efforts of the Balkan.

Likewise, the plan of former NHLer Anson Carter, who seemed to drop the idea of a bid for the Thrashers as quickly as he thought of it, proved to be but a sidebar in the conversation.

In the end, as Stephen Brunt outlined in the Globe and Mail a few weeks back, though delayed by that period of time for any number of reasons, (as we've documented on the blog here) the NHL indeed is coming back to River City.

No longer will Winnipeg be used as the leverage for struggling franchises in American cities, someone else will have to be handed that torch, (bonjour Ville de Quebec, hello there Hamilton), instead they now join the lodge, all that seems to be left to do is take the secret oath, sacrifice a small animal or two and vow eternal fealty to Gary Bettman and the Vice Presidents.

And while Tuesday will leave more than a few disappointed fans in Atlanta (though sadly not enough that perhaps could have saved their franchise,  a city that has had its NHL presence taken from it twice now) the excitement north of the US Canada border proves a reminder as to where the heart of the game remains.

Tuesday, to borrow the immortal words of Bob Johnson, has  proven to be a good day for hockey for Winnipeg and Canada for that matter.

It is in Manitoba today that the grievances of the past have been redressed, the ghosts of the past brought home and hockey returned to a place where it courses through the blood, part of life itself.

They are celebrating at the Forks and throughout the city today, their far too long absence from the NHL club finally reversed.

As the day progresses we'll update the items of celebration from Manitoba, resonating across the country, a discussion of which you can find below.

Now Mr. Bettman while we have your ear, there's this city on the north shore of the St. Lawrence River, a little east of Montreal you might be interested in...

Email ThisBlogThis!Share to TwitterShare to FacebookShare to Pinterest
Labels: Winnipeg returns to the NHL

The Loyal fans of the Loyalist City are ready for a string of parties, as their local heroes the St. John Sea Dogs became the first Atlantic Canadian based hockey team to win Canada's Junior A Championship, the Memorial Cup. 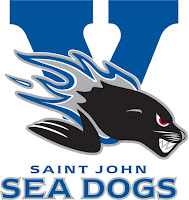 The Sea Dogs claimed victory on Sunday evening, holding off a frantic third period attack from the Mississauga St. Mike's Majors and taking the championship on the strength of a 3-1 victory.

It marks a successful return to the Memorial Cup for the Sea Dogs goaltender Jacob DeSerres, who last year played for the Brandon Wheat Kings and suffered a rather handy defeat at the hands of the Windsor Spitfires.

365 days or so  later however, it was a very different result for DeSerres now a member of the Sea Dogs who made remarkable save, after remarkable save in the third period of Sunday's championships.

For the Majors, the lengthy road required in the tournament, (due to their slow start they had to qualify for the final through the most torturous route of what seemed like an elimination game after elimination game) seemed to wear on them in the first half of Sunday's game, as the Sea Dogs jumped out to a quick 2-0 lead.

However, spurred on by their home crowd the Majors battled back and but for that remarkable goaltending of DeSerres they surely deserved to have been in the lead, but with the St. John goaltender setting up the road block, the Sea Dogs finally capitalized on their opportunities with Jonathon Huberdeau netting the insurance marker with a nifty move to push the puck past the sprawling Majors goaltender.

St. John's was a well rested squad for this championship game, having qualified for the Memorial Cup final much earlier in the week on the basis of their perfect record in the early round of the tournament, the rest while perhaps providing for a bit of rust, never the less didn't seem to affect them that much in the end, though the third period provided a few tense moments as they began to scramble in their own end up the the ceaseless attack of the St. Mike's squad.

And while they seemed to be bending quite a bit as those final moments started to count down, they never broke, securing victory and bringing home the Memorial Cup to the Quebec Junior Major League and providing New Brunswick with their first Junior A hockey championship.

It was a crowning achievement for Gerard Gallant, the head coach of the Sea Dogs who was also named Canadian Junior Hockey coach of the year, as he steered his squad through comebacks in the Quebec league finals to reach the Memorial Cup and brought them to Mississauga where they dominated the early going this week.

Gallant ended up facing a fellow Prince Edward Islander in Dave Cameron the St. Michael's head coach, two Island boys that have made it to the front of the national stage in Junior hockey and may yet have more success to come in the pros one day.

While supportive of each other and quick to praise each others teams and the coaching discipline in place with them, for this summer it will be Gallant with the boasting rights from Charlottetown to Summerside and everywhere in between.

But not before he returns to St. John with a pretty impressive keepsake from the teams trip into Upper Canada.

Some of the reviews of the Championship game can be found below.


Our full HockeyNation review of the tournament can be found here.
Posted by . at 8:22 AM No comments:

Just hangin' around Portage and Main waiting for a parade to start... 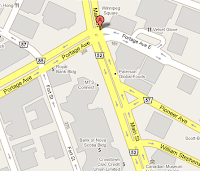 As a follow up piece to our earlier missive about the prospect of the Atlanta Thrashers migrating north this summer to set up residence at the MTS Centre for October, we offer up a few items to help while away the days until the NHL gets around to an update, if not an actual announcement of some sort.

If patience is one of the tests of a city's resolve in hosting an NHL franchise and the chance to make money, break even or suffer massive losses, then we think by now Winnipeg has more than aced the exam.

Still, with Gary Bettman playing coy with his admirers in the Keystone province, (most recently offering up some interesting asides on his very own little radio program), the folks at the fork of Assiniboine and Red Rivers may need some reading material to help pass the hours and hours and hours before they can celebrate (or suffer the burden of fai.... uh, er, lets not go there please, though the Winnipeg Police have plans in place for whatever an outcome).

So till then, while we're all hangin' around awaiting the Commish and his arrival in the city for the swearing in ceremony to the NHL lodge, some more reading material to go with all those links we reviewed on Thursday.

Flip the digital pages along with us below.

Winnipeg Sun-- Cops plan for Portage and Main mayhem
National Post-- 'Anti-Balsillie' winning friends in Winnipeg
National Post-- IKEA has got Winnipeg's back
National Post-- A New NHL awaits Winnipeg
Globe and Mail-- The man who revived the Jets by killing them
Fox News-- Bettman refutes reports about 'done deal' in Winnipeg
CBC-- Hockey and 'The Peg'
Atlanta Journal Constitution-- It will be a quiet holiday weekend on Thrashers front
Posted by . at 11:19 PM No comments:

Email ThisBlogThis!Share to TwitterShare to FacebookShare to Pinterest
Labels: Waiting for the comish 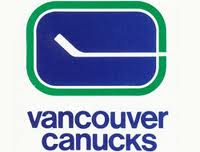 It's twelve wins down and four to go for either the Boston Bruins or Vancouver` Canucks, as the Eastern and Western Conference champions prepare to take on the challenge for Lord Stanley's Cup for the 2010-11 season.

As we have provided through rounds one, two and three, we will offer up the results, summaries and news items of note as the quest for the Cup continues on through to mid June.

Lead up to the series


Vancouver Province-- Conflict of interest too big to ignore


Waiting for the B squads ( while the Bruins and Bolts battled it out, the Canucks were patiently waiting on the west coast to see who their rivals for the Cup would be, some of the items of note during that wait can be found here.)