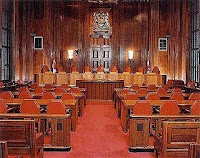 With a new season underway, Chief Justice Colin Campbell of the NHL Supreme Court stands by to mete out justice for those that can't play fair on the frozen ponds of the NHL.

We will follow the efforts of Justice Campbell as he does his best to punish the offenders and set forward those good examples to keep everyone on the straight and narrow.

We'll track the need for discipline through the season, as the offenders make their appearances in the halls of NHL justice, our offenders may now approach the bench.

January 14-- Nashville Predators-- Shane O'Brien suspended for two games and to forfeit $39,024.04 in salary after a stick swinging incident with Florida's Stephen Weiss on January 13.

January 9-- Calgary Flames-- Tom Kostopoulus receives a six game suspension and forfeits $29,569.82 in salary after delivering a blow to the head of Red Wing Brad Stuart in January 7 game.

December 29-- Philadelphia Flyers-- Jody Shelley suspended for two games after an on ice incident against Vancouver, Shelley also will forefeet $26,829.27 in salary.

December 13-- Philadelphia Flyers-- Jody Shelley will sit out two games and forfeit $11,827,96 in salary after a hit on Adam McQuaid on Saturday night.

November 18-- Calgary Flames -- Olli Jokinen is out of the Flames line up for three games after a cross check to the head of Phoenix's Wotek Woloski on Wednesday night.

November 18-- Tampa Bay Lightning-- A charging incident on Wednesday night has the Lighting's Mattias Ritola suspended for two games and out 5, 555.92 in salary for an incident against the Islanders Matt Moulson.

November 13-- Minnesota Wild-- Careless use of his stick has gained Minnesota Wild defenseman Brent Burns a two game suspension, after an incident on November 12 at the end of the Wilds' game with Florida.

October 22-- Vancouver Canucks-- Vancouver's Rick Rypien will sit out six games for making contact with a fan during a game in Minnesota.

October 18-- Doan suspended three games for hit to head -- Phoenix Coyotes forward has been suspended for three games and will forfeit $73,387.11 in salary after an illegal check to the dead of Anaheim's Dan Sexton.

October 15-- Ottawa Senators -- Nick Foligno won't be suspended but will be short 2,500 dollars after he was fined for an illegal check on Carolina's Patrick Dwyer.

October 13--  Chicago Blackhawks-- The Hawks will be without Niklas Hjalmarsson for two games after he was suspended for his hit from behind on Jason Pominville of the Sabres on Monday.

October 10-- New Jersey Devils-- The Devils Pierre-Luc Letourneau Leblond has been suspended for one game for instigating a fight in the final five minutes of a game Saturday with Washington.

October 4 -- Montreal Canadiens--  Michael Cammalleri will serve a one game suspension for a slashing incident Saturday against the New York Islanders.

Email ThisBlogThis!Share to TwitterShare to FacebookShare to Pinterest
Labels: From the files of Justice Campbell, suspensions for 2010-11 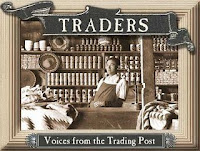 The trade, it can change a players career for good and sometimes for the bad. An opportunity for a fresh start for some players, or just one final indication that their days in the pros may soon be coming to an end.

For the General Manager it provides the opportunity to improve a team heading towards a playoff spot or fill in some gaps that suddenly become urgent due to injuries. For teams that are going nowhere fast, the trade can line up future prospects or remove burdensome contracts in preparation for a better tomorrow.

We'll track the deals as the come to pass during this 2010-11 season, providing some background for the names that may soon have to change their mail delivery notices.

A compilation of the unlucky members of the NHL coaching and managerial fraternity, who find themselves outsourced in the 2010-11 season.

From the freshest of recruits, to the oldest in tooth of the ancient order of coaches they never know when the phone call or tap on the shoulder will come. Some survive through to the playoffs, others are gone before the season gets too far along.

December 23-- New Jersey-- John MacLean is replaced as coach of the Devils, Jacques Lemaire is coaxed out of retirement to take over the team once again.

Email ThisBlogThis!Share to TwitterShare to FacebookShare to Pinterest
Labels: Hired to be fired 2010-11

Our catalogue of offerings from the 2009-10 hockey season.

Email ThisBlogThis!Share to TwitterShare to FacebookShare to Pinterest
Labels: Ancient links and features

Injuries, they can derail even the most talented teams Stanley Cup plans in the twist of an ankle.

Whether a star player is out for a couple of games, or  a string of players goes on the IL just as a team makes a push for a playoff run, the loss of a player for any length of time is the thing that keeps GM's up late at night.

Through the 2010-11 season, we'll log those players that miss action due to injury. We'll provide the NHL injury alerts as part of our review of the injuries as the season moves forward.

October 28-- Chicago Blackhawks-- Marian Hossa will be out of the lineup for a couple of weeks after suffering an upper body injury on Wednesday.

October 28-- New Jersey Devils-- A broken hand means that Matthew Corrente won't be on the Devil's blue line for the foreseeable future.

October 27-- Colorado Avalanche -- Craig Anderson is listed as indefinite after injuring his right knee, no surgery is required, but the treatment and rehab time takes the goaltender out of the line up.

October 21-- Los Angeles Kings-- Defenseman Drew Doughty will be out of the line up for at least a week after  an upper body injury on Wednesday night in a game with Carolina.

October 19-- Montreal Candiens-- The Habs will continue to be without the services of Andrei Markov who remains on the injured list as he recovers from off season knee surgery.

October 15-- New York Rangers -- Injuries are going to play an important role in the start of the New York Rangers season, the Rangers will be without Marian Gaborik and Chris Drury for a significant amount of time, Gaborik suffered a separated shoulder in a game with the Leafs, he will be out two to three weeks, while Drury will miss six weeks after breaking his left index finger, he had recently returned to action from an injury to that same finger in a different place

October 15-- Ottawa Senators-- Goaltender Pascal Leclaire is back on the injury and will miss an undetermined amount of time after suffering what is called a lower body injury.

October  6-- Philadelphia Flyers-- Ian Lapierre, forward, the status of the veteran flyer is still unresolved after last season's eye injury. Reports out of the Philadelphia area have it that Lapierre has been advised to retire (see NHL injury alert here) (see previous Injury alert here)

October 3-- Chicago Blackhawks-- Brian Campbell, Defence,  will miss the first four to five weeks of the season as he continues to recover from his broken clavicle of last season (see NHL injury alert here)

September 19-- Ottawa Senators-- Filip Kuba, Defence, the Senators will be without the services of their defenseman for five to six weeks after he suffered a broken leg (see NHL injury alert here)

September 16-- Pittsburgh Penguins-- Jordan Staal, center, is expected to miss the start of the regular season, out of the line up for 5-6 weeks as he recovers from a procedure on his infected foot (see NHL injury alert here) (see previous injury alert here)

September 7-- Minnesota Wild-- James Sheppard, center, out indefinitely due to a serious knee injury (see NHL injury list alert here)
Posted by . at 9:05 AM No comments:

We will archive our various team home sites here, one click takes you to a page with a variety of information about your favourite team. From homepages, to schedules, news items and information from the HockeyNation archives it's your starting point each day to finding out more about all 30 teams of the NHL .