Not out of the woods yet, but into a clearing 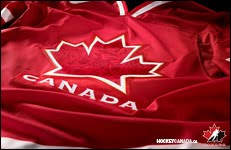 Canada's suddenly extended path towards gold got off on the right skate on Tuesday night, as Team Canada finally broke the mental block between wanting goals and getting them with an 8-2 victory over Germany.
It once again took a bit of time a rather tentative first period brought back memories of the Swiss game, where Canada was firing off shots but not finding a lot of success on the scoreboard. But with a few connections on the ice the Canadians found the form that the nation had been waiting for and provided a very resolute offensive display.
Led by Jarome Iginla, who found success with Sydney Crosby and Eric Staal, likewise the San Jose connection also moved the puck well, with Joe Thornton finally making it onto an Olympic scoring sheet.
With Vancouver Canuck Roberto Luongo taking to the nets in front of his home crowd, the Canadians quickly set the pace for Germany, one which saw a majority of the play in the German end of the rink, with wave after wave of Canadian lines crossing the blue line to take the test of the German defense.
In the end the amount of time spent in front of German goaltender Thomas Greiss paid off, as once the goals began to go in, there really was not much doubt as to which side would be advancing to Wednesday night and for Canada a rendezvous with an old nemesis the Russians.
While more than a few of us probably thought that this test would come a little closer to the Gold medal game, it's the nature of Canada's play in the previous games that brought them to Wednesday's win or bid farewell match.
It once again offers up the drama to the storyline, to long time rivals with two of the marquee players of the professional game today match up in a winner moves on format. It's nerve wracking but exciting at the same time, a prime example of the drama of sport and the tension it can provide.
Canada which has stumbled in the early going, has a chance to erase that slate completely on Wednesday, a few twists of a puck or a less amazing goaltender or two in the opposing nets and there wouldn't have been the need for this dramatic midweek confrontation.
But that's just the way it all turned out, while nerves for Canadian fans may be a little frayed hockey is the winner with the way it's turning out so far, the building momentum towards the gold medal game of Sunday, a target that Canada can't focus on at the moment, instead it's one game at a time, the next one perhaps the greatest test of this teams mettle yet.
If that mettle is up to the task, then that gold medal may yet be close at hand.
Globe and Mail-- Canada books date with Russia in quarterfinals
Globe and Mail-- Without pause, Babcock will start Luongo again
National Post-- Like it or not, the Russians are coming
National Post-- Dominant win for Team Canada
National Post-- Team Canada storms into quarter-finals
National Post-- Iginla finds momentum with Staal, Crosby
Vancouver Sun-- Hockey's Cold War wakes from hibernation, as Luongo leads Canada against Russia
Vancouver Sun-- Keith and Doughty becoming a pretty pair on Canada's blueline
Vancouver Province-- Tretiak eagerly anticipating latest Russia-Canada matchup
Vancouver Province-- Yes, we can but dream
Posted by . at 1:06 AM