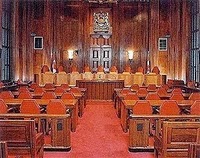 As the new season begins,  so to will the need for a watchful eye on nightly action for play beyond the rules and that puts player safety at risk through.

They will be reviewing on ice incidents and assessing what punishment, if any will be required on a nightly basis.

As they have in past years, video is becoming key to the league announcements when it comes to punishment delivered by league officials, a helpful way of explaining to fans just what has been taken into consideration with each infraction.

Our listings of his deliberations can be found below, outlining those that have been summoned to the tribunal.

Offenders may now approach the bench, the court is now in session. Chief Justice Parros presiding.

The Case files of George Parros

Other Notes related to the Department of Player Safety

Resources From the Department of Player Safety

News from the Department of Player Safety
Posted by . at 1:25 AM