A Golden shot that soothed a nation 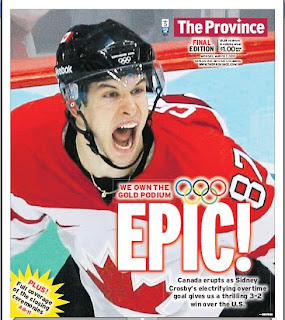 The drama was almost to much to bear, Canada living and coming close to expiring it seemed on the bounces of a little black rubber disc, the finale to the 21st Olympiad provided the final dramatic moments in a most remarkable 17 days of competition, and for the home side, after 60 minutes of regulation time and seven and a bit more of overtime, finally, it was time to breathe again.

Sidney Crosby joined the list of icons for a hockey mad nation, soon to be, if not already enshrined in memories, like Henderson of 72, or Gretzky and Lemieux of Canada Cup fame. A frantic yell out to Jarome Iginla, who quickly shovelled the memorable pass to Crosby, a short dish off that provided the dramatic final goal in one of the most entertaining finals to any tournament Canadians have seen.

For the Canadians it was a the shot that lifted the weight of the world off of their shoulders, for Ryan Miller and the Americans a goal that dashed their own dreams of perhaps one of the great upsets for our times, though by the calibre of their play through this tournament, upset perhaps is not a proper description of what could have been.

Canada won the gold and the nation had the topping of the desert that was their party, but above all of that the game of hockey was the big winner at this Olympic tournament. The two finalists showcasing that grit, heart, skill and desire that defines the North American game.

A gutsy American squad that refused to go away, continued to fight on and was rewarded for that perseverance.  The Canadians a combination that changed its dynamic as the game ebb and flowed, no one player bigger than the next, each one taking on somewhat different roles from those that they take on for their NHL teams. Never getting too frustrated despite the seemingly unbelievable number of hit goal posts, or those shots that just whistled wide or were stolen away from the top goaltender of this competition Miller.

The Americans began their comeback in the second with Vancouver Canuck Ryan Kesler scoring on his team mate Roberto Luongo, a spark for the Americans that would be used to send notice that Canada would have to play hard to the very end if they hoped to earn their Gold medals.

Canada had a one goal lead heading into the third period, the home crowd anxious for the twenty minutes to pass by and for the party to begin, early chances saw two shots ring of goal posts, the difference between changing momentum or securing victory but inches. As things turned out that Canadian party would be delayed, as the Americans refused to cede their own dreams, pulling Miller for the final minute of play, the Americans swarmed the Canadian end, frantically firing shots and making passes, one deflected over to Zach Parise, who shuffled in the tying goal in the dying seconds of the third, a goal that left Canada Hockey place, bars and living rooms across the nation in stunned silence.

To their credit, Canada again was able to regroup, no sense of panic was on the ice, most of that no doubt filling spaces wherever Canadians were gathered. For the most part of the final 7 minutes and forty seconds of this epic battle Canada had control of the flow, with the exception of a few rushes by the Americans the Canadians were taking the play into the US end of the rink.

The final sequence came from a Crosby shot from the slot which was directed to a corner, from there Jarome Iginla out muscled Ryan Suter on the boards, gaining enough space for a second to fire off that pass at the first holler, a quick snap shot found its way between the pads and Gold was ready to be mined at Hockey Canada Place.

For Canada the Crosby goal was the signal that all was well, the all clear for a nation which so wanted just one more gold medal for their collection before they closed the doors on this Olympic experience.

From Cole Harbour, Nova Scotia (and points to the east) across to Tofino in the west and Iqaliut in the north, the roar would be heard, when the time came for the goal, it was Crosby who answered, the storybook finish for the nation from he who inherits that torch from those of before.

The names in Canadian hockey history are as those of ancient lore, whether it be great teams as the Mercury's, or Father Bauer's brave amateurs of the sixties and those that followed in the seventies. Or those of the NHL giants like Richard, Clancy, Howe, Hull and, Beliveau, Orr or Esposito, Gretzky and Lemieux, some won gold, others stared down the Russians at their most powerful, while many others never had the chance to don a uniform for their country, but all are held in the highest of places in Canadian hockey.

Sunday afternoon a new generation of Canadian hockey heroes were added to the roster of acknowledgement, Toews, Getzlaf, Doughty, Perry, Iginla and Luongo to name a few, key components of a drama that showcased the game at its most fascinating level.

And one more name,  the one that becomes the answer to every bar room discussion for the next generation, the name that kids will call out as their inspiration for all that seems to signify Canadian hockey.

Sidney Crosby, game winning goal scorer, gold medal winner, with a nation's rattled nerves finally soothed as he provided that final tuck in service, allowing a country to eventually (once the party's over) go to sleep with a dream of gold fulfilled.