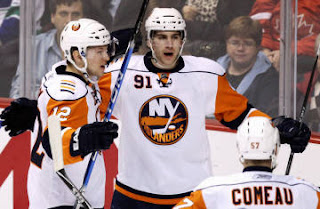 A couple of weeks ago, Sidney Crosby's golden goal was the talk of the town, but for a few minutes on Tuesday night, the name on everyone's mind was John Tavares.

The New York Islanders youngster put on a bit of a show for his only BC appearance for the foreseable future, picking up five points and pacing his team to a 5-2 victory over the hometown Canucks.

Much was made prior to game time about the arrival of the Islanders in Vancouver from the sub plot of their shared history in Stanley Cup battle and the first home for Canucks goaltender Roberto Luongo.  Added on to the buzz for the night was the arrival of Tavares, the top pick last year by the Islanders, and a player widely considered as one of the players to watch over the next few years to take the next step.

By the end of the game, the storyline would be all Tavares, who stepped into the spotlight in Vancouver and showed that he is going to be the real deal, despite the occassional hiccup along the way this year.

The Islanders who are fading fast in this NHL season, weren't expected to put up much of a resistance for the surging Canucks, all the ingredients for the continuation of a home ice winning streak were in place, excpet that the Islanders apparently never got the script.

They came out fast and scored a couple of goals to take a 2-0 lead on the Canucks, building on it through the game and even when flustered late in the second managed to dash any thoughts of a Vancouver comeback with a late period goal to build what would be an insurmountable cushion.

As the third period started Luongo was on the bench, Raycroft was in the nets to try and change some of the dynamic of the Islander attack. He was helped out by the Canucks who finally managed to gain some control on the flow of the game, yet they couldn't find the mark on Islander Goaltender Dwayne Roloson, who played a solid game in the New York nets.

The final score may actually have been short a few Islander markers, throughout the game, goalposts and crossbars proved to be Canuck friendly as at least three other scoring opportunities were thwarted by the ping of a shot off a post.

The Canucks who have become rather legendary of late by their comebacks, couldn't find one on Tuesday, stymied by the Islanders and perhaps a little surprised by the ease of play and speed of Tavares, as he showcased some of the buzz that surrounded him prior to last summers draft and provided his best performance of the year for Vancouver fans.

It's been quite a busy couple of weeks for Vancouver hockey fans, they've celebrated Sid the Kid with his medal winning goal and now they've seen a glimpse of one of the rising stars of the game, though perhaps they saw a little too much of him on Tuesday.

Photo from Globe and Mail website
Posted by . at 1:21 AM