Yzermans' decision getting easier in the nets 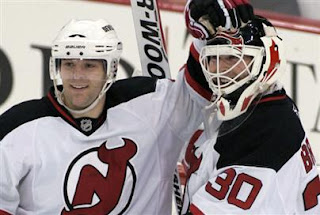 He may have recently taken out American citizenship, but when it comes to defending the goal Martin Brodeur should, more than likely be waving a big Canadian flag after December 31.

With the deadline fast approaching for Team Canada GM Steve Yzerman to name the Canadian Olympic roster, the Devil's goaltender and long time fixture for Canada has once again provided the perfect timing for a record setting run.

Monday night, Brodeur passed the legendary Terry Sawchuk's 40 year record for career shutouts, and if Mr. Yzerman needs a scouting report, he need simply talk to Sidney Crosby, as it was the high profile Team Canada star who faced off against the Devils as New Jersey blanked the Penguins 4-0 and provided Brodeur with shut out number 104.

He turned aside 35 shots on his way to the record books, the second time in less than a week that they've had to reprint those hallowed pages, last week Brodeur set the modern record for regular season appearances with 1,030 having since padded that lead by two more.

As Brodeur continues to play some of the most impressive hockey of his career, the chatter is dying down about tough decisions for Yzerman, while the Devils have been finding success, the other candidate for the starting job, Roberto Luongo has been struggling along with his Vancouver Canuck team mates in the last few weeks, an untimely moment to have a slump.

New Years Eve is the deadline day, with the playing roster to be announced to an anxious nation just before the 2010 New Year festivities begin, when Yzerman reads off that name for the nets, the host city of the Olympics may feel a little disappointment that their favourite isn't number one.

But if they're true to their instincts they'll surely realize that the numbers don't lie and right now, heading into the Olympic year, Brodeur is certainly the one to roll with. Luongo will still have a place, we can't see it otherwise, but on performance so far this year, he's number two on the list and should find that same spot on the Olympic roster of New Years Eve.