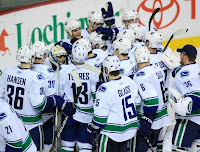 Finally, the Vancouver Canucks called closing time in their series with the Nashville Predators, bringing to an end their excursions to Music City for this year.

Showing a fondness of stretching a series out of late, the Canucks mindful perhaps that allowing teams second and perhaps third chances at success wasn't the best of strategies brought their new found rivalry  with the Predators to a conclusion on Monday night.

Once again relying on the passion, drive and determination of Ryan Kesler (can we just hand out a Conn Smythe trophy today regardless of the future Stanley Cup final match ups?) who played at yet another level beyond the rest on the ice, the Canucks outlasted the Preds to claim the series and secure a rest as they await their next opponent. 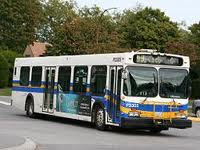 As Alain Vigneault so aptly described it post game, "Kesler decided to drive the bus", and indeed Kesler has been driving the bus for a fair bit of time in this Stanley Cup journey, apparently a considerate bus driver considering the number of passengers along for the ride who aren't at the moment paying the full fare at the cash box.

It has been Kesler's playoffs thus far, his value to the Canucks rising with each game, his status in the league growing stride by stride, hit by hit, goal by goal.

In the post game handshakes after the conclusion of the series, Barry Trotz the Nashville coach and his assistants each had a special word for Kesler, a hearty slap on the back for the man who defined the kind of heart that is required for championship teams.

Their comments post game about his impact on the series, sincere, honest and right on the mark.

A number of his team mates should keep those comments in the back of their minds as they move on in their Stanley Cup journey, it's the template for further success.

Game Six showcased a more determined effort from the Canucks, having let the opportunity to dismiss the Predators at home slip away on Saturday, they seemed to approach Monday with a new sense of urgency.

Roberto Luongo, was at his top form on Monday, called on in the first period to make some key saves early on,  at times however he no doubt may have felt like the Maytag repairman as the Predators offensive troubles continued on, but with elimination almost at hand in the third the Predators did rally for one last stand.

A flurry of activity late in the third (always a dangerous period of time for these Canucks this playoff year) kept Luongo sharp and he didn't disappoint, turning aside a pair of dangerous opportunities late in the game that could have sent this series into yet another overtime frame and whatever destiny may have held.

Instead, the door was shut and by the final of the sixty minutes it was time for a Nashville farewell (cue up turn out the lights, the party's over), the Predators fans, a collective that brought a strong emotional attachment to their squad giving their team one last serenade as the final bows were taken by the players as they left the ice.

For the growing legion of fans in Nashville, the season's end comes just as the party was getting started, but  the future would seem to be bright for the Preds, a young team with a solid nucleus that is but a few players (goal scorers resumes are welcome) away from further dates in the Stanley Cup playoffs.

With Joel Ward set for free agency, one imagines that GM David Poile will be anxious to secure his teams  spark plug to a further extension of his time in Nashville, securing a few more play makers will also help take the pressure off of Mike Fisher who found extra attention in this series and the Anaheim on.  With few other offensive assets, shutting down Fisher and trying to stop Edwards is all a team would seem to do to keep Nashville from goal chances.

The wall that the Preds amazing goal tender Pekka Rinne had become was finally breeched, but in this series he was one of the key elements of the Predators game, suffice to say the Preds, unlike a certain team in Philadelphia won't be seeking out goaltender applications for the foreseeable future.

The big towers on defence of Suter and Weber put in an amazing number of minutes on the ice, a toll that perhaps finally began to show as the periods ticked away in game six, a few uncharacteristic miscues along the way the difference in the game.

Still, add another tandem on the back end that can take some of the pressure off the big two and these Predators will stalk further in years to come.

For the Canucks, a much desired rest period has arrived, a chance to take care of the bumps and bruises of two long series, an opportunity to recalibrate an offence that of late has had but only one or two working parts, mainly on the Kesler line.

Hopefully, the rest doesn't slow down the Canucks' centre, as goes Kesler this year so go the Canucks, their fans no doubt are hoping that with Kesler in the drivers seat, the wheels on the bus continue to go round and round.

All the way to the final stop on the route in mid June.