Canada rolls to an easy victory, as the Americans find a harder path after Day One Action at World Cup

They're off and running and Team Canada looks to have things well in hand after Day One of the World Cup of Hockey in Toronto.

If the World Cup of Hockey was to be a Western, it would resemble a competition between Stage Coach teams, the Canadian Coach, travelling along the winding road ahead with confidence, staying on the trail, keeping it's pace fast, the dynamite on board dry, stable and secure.

Meanwhile, the Czech stage is still stuck back just a short distance from the starting line, the horses rather tired, the map they've been given to start their journey suddenly more than a little confusing, holding few clues as to how to make it to the first checkpoint.

As for the Americans?  Well at the moment, their coach (read that in any number of ways if you will) is on the side of the road while they fix a wheel or two, that dynamite is dangling from the back of  the coach and could go boom any moment and the guy handling the reins is probably not the most popular cowboy to be found along the dusty trail.

The other competing stage line of Day One is a Bedouin like collective of European that are more akin to hobos travelling on a boxcar, and on Saturday they clearly relished their roles as the spoilers of the opening match of the World Cup, delivering a significant setback to the Americans suggestion that this tournament marked "their time".

The first game of the day featured that Team Europe congregation who came out fast and showed little in the way of being intimidated by an American squad that struggled to find the net and at times couldn't match the speed of the Europeans, with the USA looking confused at what was happening and more importantly how to address the challenges that began to present themselves through one, two and three periods of play.

The advantage of being a team that most were dismissing quickly became clear to those watching the ice breaker of the tournament, the Europeans played very loose and gained confidence with each shift, the Americans were tight on the ice, their desperation level creeping higher and higher as the Europeans continued to add to the scoreboard.

The head scratching actually began prior to puck drop, when head coach John Tortorella announced his Game Day scratches, with Dustin Byfuglien  listed as not dressing for the game, left to watch the contest from above.

A coaching decision that proved to be the first of many questions on the day that provided more than a few areas of concern for fans of the US squad, some of whom have already wondered aloud just what kind of team GM Dean Lombardi had settled on.

The Americans, a team that likes to play the physical game, didn't channel much of that kind of play through the sixty minutes as the Europeans began to build their lead on the way to the 3-0 final score.

The only time the Americans found their mark delivered a goal that in the end was disallowed, which wasn't helpful for a team that has struggled to find the net at the best of times in the run up to the round robin play.

Things weren't helped by the pace that the Europeans brought to the game, picking up their first goal of the game in period one, adding two more in the middle frame, capitalizing on sloppy defensive play and turnovers that proved fatal to the US side as the game moved into the final period of play.

For the most part, the European team kept to a well defined approach, rarely taking chances and frustrating the US for much of the play, Goaltender Jaroslav Halak was well into the American psyche by the third period, holding the US attack scoreless despite firing 35 shots his way.

As the time began to wind down through the final frame, the Americans could not find the way to break the grasp that the multi-nation lineup had on the play.

Things don't get any easier for the USA, which with one loss already on the books, now has to take on the Canadian team on Tuesday, about the only benefit of that match up is that the importance of the game should mean that the Americans return to their physical style.

Something that will at least help them get back into some form of rhythm as they look to quickly turn themselves around on a road that suddenly looks like a fast track to elimination from the tournament. 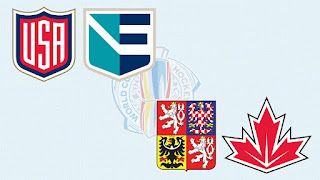 As for the Canada/Czech Republic match up, the Canadians took their workman like approach into the first period and never put down their tools, collecting three goals in period number one, setting a fast paced tone that kept the Czechs off balance for most of the sixty minutes of play.

Sidney Crosby provided not only the on ice leadership that comes naturally, but he delivered on the score sheet regularly, with one goal of his own and two helpers on the way to 6-0 Canadian victory.

The Canadian scoring distribution was fairly wide with six players collecting goals, with Crosby and Brad Marchand six points alone, collecting goals and assists through the three periods of play.

Carey Price continued on with his remarkable record of shut out hockey in International Play and while not particularly over worked,  especially in the final two periods when the Czechs struggled significantly, Price did get to see enough action to put to rest any concerns that fans might have had about his health after last years injury plagued season.

The Canadian start was about the best result that head coach Mike Babcock could have hoped for, his team did not take their competition lightly, playing hard for much of the game long after the result was no longer in doubt.

Every line and each shift sticking to the lesson plans of the training period, the blue print providing a notice that Team Canada is fully aware of what's at stake and are more than ready to keep to their plan as they travel through the two weeks ahead.

You can find the game summaries and media notes on the action from Day one on our Game Day Page for Saturday's play.
Posted by . at 9:45 PM

Email ThisBlogThis!Share to TwitterShare to FacebookShare to Pinterest
Labels: Canada and Team Europe claim first two points of Day one play at World Cup of Hockey