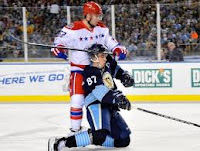 This years all star game and corporate schmoozefest in Carolina may be missing one of its very public personalities, that as Sidney Crosby of the Penguins offers cautious thoughts that he just may take a pass on the annual skating show if he hasn't recovered from the effects of his concussion.

And while he has been doing a little bit of backing off of his original talking points on his status for the Carolina rendez vous, he has not been shy in expressing his concern over the state of the physical play in the game today.

Still suffering the effects of a concussion received at the Winter Classic, Crosby is sending some pretty solid signs that he's not too happy with the NHL's concern over those that account for the nightly highlight reels from league action.

The problems for the Pittsburgh captain seemed to start in the waning moments of the second period of that outdoor spectacle against the Capitals, he seemed stunned after a passing shoulder from the Capital Dave Steckel.
.

.
.
.
Still he took to the ice in the third period, though you have to wonder about the wisdom of the Penguins to let their marquee player take to the ice in less that top condition.

His situation would seem to have taken the final turn towards the Injured list in the next game against the Tampa Bay Lightning when he took another hit, this time Victor Hedman, it was following that one that the Penguins announced that Crosby would be out of the line up for the foreseeable future.
.

.
.
.
The status of Crosby over the last few weeks since has been of much discussion around the league, the prospect of one of the league's largest attractions indefinitely off the ice, no doubt the kind of marketing nightmare that the NHL doesn't need.

And yet that is exactly what is happening at the moment and the league has no one to blame but itself over it.

Head shots are a growing problem in league play, the lack of respect or careless dis-regard over the level of play the one dark cloud over what has been a generally sunny sky for the NHL this season.

It's an issue that the league seems to forever put on the back burner, as Globe and Mail columnist Stephen Brunt rightly points out just ask Mark Savard, who still feels the effects of a brutal Matt Cooke hit (Crosby's team mate by the way) from last year.

The fact that this time it's the league's top player that is the main example of that lack of respect should be of key concern to Gary Bettman and league owners, who have been slow to pick up the theme that their meal tickets may be at risk.

If it takes a stand by Crosby and his absence to hammer home that message so be it, in the end the league is only as good as the players that shine in it.

Otherwise, if the trend of troubling hits to key players continues, the NHL will end up as nothing but a higher paid version of the ECHL, and perhaps with the commensurate attention levels from the fans.

Some of the reviews of the Crosby situation and the larger issue of head shots and such can be found below.