The NHL rolled out their new and revised realignment plans this week, re-drawing the NHL map and returning Detroit to the Mid West from where they once ruled.

That and the strange (by geographical notions anyways) addition of Florida to Northeastern North America were some of the highlights of Gary Bettman's sketches of the NHL universe going forward in 2012.

And while Winnipeg perhaps may feel a bit of disappointment at not finding the ancient rivalries with Edmonton, Calgary and Vancouver recognized, they too have some rivalries to work on now, mainly in a North South direction (south in their case) 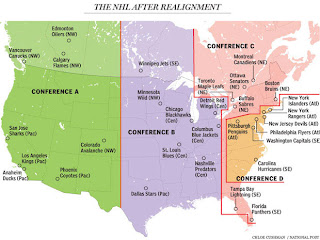 For the most part, the new league order will provide for more friendly television for a number of teams, first and foremost the long suffering Red Wing fans, who have for many a year had to stay up into the wee hours of the morning as their heroes did the West Coast trudge, beaming back their victories and occasional losses from such NHL outposts as LA, Anaheim, San Jose, Phoenix and Vancouver.

With the Wings now returning to a more natural home, their television ratings should see a significant bump upwards.

The new conference arrangements, four groupings of seven or eight teams, also will make for a more equitable travel schedule, with the Eastern teams no longer gaining the advantage of geography to provide for ridiculous short trip road trips while the Western based teams recreated the kind of march across the continents made famous in any number of world wars.

The new alignment even leaves a little wriggle room for failing franchises, (Hey How ya doin' Phoenix), with the ability to slide one or two potentially soon to be relocated franchises into an open slot, even better for the always fiscally anxious NHL owners, there is still room for two new members to the lodge, at a price that would no doubt bring a smile to all of the 29 dues paying members (Yes we can count here at Hockey Nation, Phoenix if you remember is still the NHL's brave attempt at collective socialism, owned by all, funded by all)

The playoff picture is a little more murky for teams at the moment, with two divisions of eight, it could be harder for some of the marginal teams to lay a stake to a claim for a final play off spot. But perhaps we're quibbling about things that really in the end shouldn't matter much (unless of course it's your favourite team that is left on the outside).

Overall, the reviews appear to be positive over the new groupings, though according to the Calgary Sun with a contrary opinion percolating among the NHLPA leadership.

The NHL explained its re-design with a number of items on its website:

While the new divisions still need some catchy titles (options apparently still being discussed) the groupings will look as follows:

So providing all end up in agreement, the new NHL map features the following travel destinations (see above) make your reservations now, as always, terms are subject to change...