These kids are alright 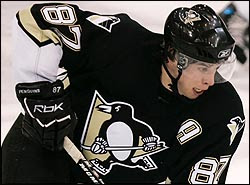 Perhaps it was the disinterested nature of the competition, but Wednesday night the kids of the Pittsburgh Penguins put on a clinic on how to have fun at the rink. Michel Therrien must sit back and wonder what there is to do with a young, brash and talented squad of players, all of whom seem to relish jumping over the boards to chase the puck.

Compare their body language and bench like demeanor to that of their Pennsylvania cousins the Flyers on Wednesday and it would be a study in polar opposites.

The Pens had jump, they were involved in the game, when a team mate scored they were quick to their feet ready to slap a glove, when Jordan Staal scored a goal to break a lengthy slump they celebrated as though Crosby had won a scoring championship, and Fleury a Vezina.

And it was very much Sidney Crosby that made things happen in front of a loud and motivated home crowd, revisiting Penguin history as another phenom shows them the beauty of the game.

The Pens are a fun team to watch, speed, skill and youthful energy give you an idea as to how much fun the game can be to watch when a team is firing on all cylinders. Much has been made of the ascension of Crosby to the upper reaches of the NHL star system, and judging by Wednesday’s game the celebration is well deserved.

The young Pen took charge of the game and in the process climbed to the top of the NHL scoring race as he had an amazing night, unstoppable by a Flyers team that only looked as though they wished they could go home now. On the night he was worth six points, one goal and five assists as he set up scoring opportunities at will a nightmare for the Flyers that they won’t soon forget.

The night was a picture of two teams going in very different directions, the Penguins destined to be the next team to reach the upper echelons of the NHL, the Flyers seemingly on a path to wander the NHL basements for a period of time.

The Penguins future in Pittsburgh may not be clear, but the success of the team is very much a solid thing. Depending on how the city and state handle the arena situation, the most promising team in the NHL may soon find a new home, possibly Kitchener-Waterloo and the surrounding Southern western Ontario area.

It would be a shame to see the hockey fans of Pittsburgh lose a team on the cusp of something special, but should it come to pass there are going to be many suitors for Pens owner Balsillie to listen to. Ontario hockey fans can only sit back, wait and see if Pittsburgh’s misfortune will be their gain.
After year after year of watching a Toronto team stumble around through the playoffs and offer up a rather tepid brand of entertainment, the prospect of having Sid and the kids set up shop must have Ontarions crossing their fingers and wishing it so.
Posted by . at 12:38 AM