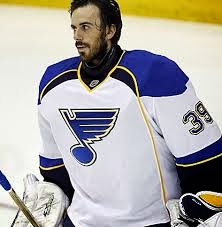 If the latest move from the St. Louis Blues is any indication, the top teams of the Western Conference are clearly ramping up for what should be a dandy Stanley Cup playoff run.

The Blues made their statement move a week before the trade deadline, as they pulled the trigger on a block buster of a deal that brings them perhaps the key ingredient for a skate with Stanley by the end of June.

By acquiring Ryan Miller, the Blues bolster the goal with a proven talent with a Vezina Trophy to his name, someone not only who has had success on the International stage, but was perhaps one of the few reasons for Sabres fans to head to the rink in the last few years.

He joins a Blues team that has as solid a defensive unit as there is the NHL, making for a fairly formidable back end for coach Ken Hitchcock.

Saturday's deal  leaves GM Doug Armstrong with only a few things to tick off on the do list for Wednesday, that of perhaps adding one or two pieces on offence to add to the scoring reach of the Blues who currently hold down second place in the West, with an impressive stats sheet of 200 Goals For, 139 Against.

Obviously with that low of a Goals Against stat, goal tending wasn't the issue in St. Louis to begin with, Brian Elliot and the now departed Jaroslav Halak putting in a stellar effort in the Show Me state.

Such is the respect that many observers have for Halak, that not many believe he'll be a Sabre beyond Wednesday, with more than a few suspecting that he'll be exchanged for more building blocks for a Buffalo squad that is in full retooling now.

The remainder of the deal sees the Sabres receive Chris Stewart, prospect William Carrier and a pair of draft picks, the currency of teams that are blowing things up and starting all over again.

For St. Louis, the opportunity to pick up someone with the resume that Miller carries with him,  offered up notice to Blues fans that the 2014 playoff run may be one to remember.

Likewise adding Ott to the team's lineup, makes for another wise step, his experience and comfort level with Hitchcock should make for a quick adjustment to the Blues lineup, his  physical contributions will add some space for a Blues offence that seems finely tuned for a lengthy pace in this years Stanley Cup playoffs.

With the two pick ups, the Blues, even if they make no other moves on the Trading Deadline, have provided a bit of extra pressure on their fellow West Division conference rivals, who will have to carefully look for ways to match up the strength of St. Louis who surely are a team to watch.

For the fans of the Blues, we imagine the regular season's end won't come soon enough, the opportunity to watch the lineup arranged for coach Hitchcock is something that St. Louis fans will be anxious to see in action when the hockey starts for real in the first playoff round and if all goes according to the blue print, we imagine the Blues organization anticipates it carrying on through to the end of June.

Email ThisBlogThis!Share to TwitterShare to FacebookShare to Pinterest
Labels: Blues jump to Stanley Cup favourites with move in nets