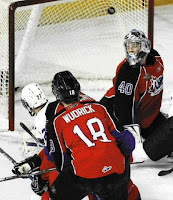 If NHL General Managers were looking to find some offense, they made the right decision in their travel plans to Calgary on Wednesday. The assorted scouts and GM's joined in with 13,596 fans at Edmonton's Rexall Place to take in the now annual night of would be future stars.
This year's CHL prospects game provided for twelve goals as the Whites thumped the Reds 8-4 in the showcase for the top draft prospects in this June's amateur draft.
A nightmare of a game for a goaltender, a smart would be draft pick might consider "pulling" something for next years event, as normally reliable Junior goaltenders suddenly face what appeared to be a firing squad of shooters from the Whites.
The White squad seemed to get into their groove early on and never really had to look back, taking the lead from the five minute mark with an overwhelming control of the play.
While there's a fair amount of pressure to perform in this game, for the most part it's really just a showcase of the soon to be selected. A good portion of those on the ice in Calgary on Wednesday will be selected in the first round, anyone who might have slipped a notch tonight probably would fare no worse than the second round.
But, the one game make or break idea for this game doesn't really wash. It's more of a mid-term report card for a lot of the players, how they lead their respective junior teams down the final month of the season and into the playoffs will probably count more for their final placement on draft day.
The prospects game makes for an interesting television program, but for NHL scouts and GM's there are still a few miles to put on the odometer before they pencil in their final selection, you wouldn't think that one night in mid January is going to set any names in stone.
Edmonton Journal--Boychuk, Schenn lead Whites over Reds in Prospects game
Edmonton Journal--NHL prospects anxious to make good impression
Edmonton Sun--Booming victory
Montreal Gazette--Staal aboard as Jared finds NHL fast track
Canadian Press--Team Red crushes Team White in Top Prospects skills competition
Posted by . at 1:28 AM