Putting some capital into an appreciating asset 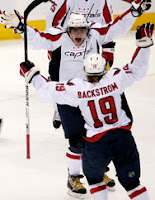 Alexander Ovechkin may very well be singing along with Pink Floyd this morning, that is if he’s finished counting his stash.

The numbers and length of the contract announced on Thursday boggle the mind, a sign for smaller markets that maybe the ice isn't going to be as level as everyone thought after all.

The Washington Capitals opened up the vaults to sign their Russian superstar to a 13-year, $124 million contract extension on Thursday. The deal makes Ovechkin the first NHL player to sign a nine figure contract. It also becomes the largest sports contract in Washington sports history, which will make for an interesting trivia question in about thirteen years or so.

The thirteen year deal will pay Ovechkin 9 million a year for the first six years and then ten million for the remaining seven, giving his accountant time to find some tax shelters for all of that currency.
.
In what will no doubt be bad news for agents across the NHL, Ovechkin’s monster deal was negotiated without the benefit of a player agent, instead Ovechkin dealt directly with the Capitals, breaking from time to time to check in with his parents and brother. Suddenly that sound you hear is hundreds of player agents trembling in their offices, afraid to answer the phone.
.
Ovechkin’s contract will for now, once again give him a leg up on rising star Sidney Crosby, who only last summer signed his own contract extension for five-years at what must now seem like a paltry $43.5 million.

The decision by the Capitals to secure their future to that of their latest phenom comes with of course a bit of a history lesson, it wasn’t that too long ago that they flashed a fairly sizeable stash of cash at Jaromir Jagr, a decision for which Ted Leonis is still making payment on, even though Jagr now stick handles for the New York Rangers.

No doubt the Capitals are expecting (hoping, praying, maybe sacrificing small animals for) that things will work out a little differently this time, with Ovechkin and the rising group of talent that they have in Washington leading them to the Stanley Cup sooner rather than later.