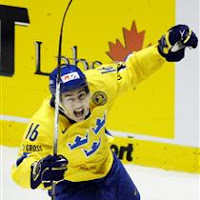 Sweden will return to the gold medal game of the World Junior championship on Saturday after their overtime victory over Russia.

For the most part (the third period being a bit of an exception) it was a closely played if occasionally tedious game, there was no scoring in the first period and more than a few bouts of sloppy play from both teams which didn’t exactly keep the crowd on its feet for the first twenty minutes.

The Russians took the lead in the second when Nikita Filatov slipped the puck under Swedish goaltender Jhonas Enroth in the waning moments of the period.

For a good portion of the third, that 1-0 lead looked like it would be more than enough to secure a Russian victory, though the Swedes picked up the pace in the third finding more and more opportunities to get a goal or two as the period progressed. They finally were rewarded for their perseverance with a goal a little over half way through the third, Robin Figren stirred the hopes of the Swedes and their fans, with a power play goal that seemed to set the Russians back on their heels for the remainder of the third.

The Russians held off a spirited attack as the period wound down, dodging more than a few bullets before sending the game into overtime. Shots on goal however told the tale of the third, as the Swedes out shot the Russians 13-2, as the Russians retreated into a defensive shell of sorts that didn’t serve them well in the end.

The overtime however would prove to be more than the Russians could handle, Mikael Backlund scored at 6:18, securing the 2-1 Swedish victory, perhaps an unfair result for Russian goaltender Sergei Bobrovsky, who had fought off 36 other scoring opportunities before the winning marker, disappeared behind him.

The Russians however could hardly blame their goaltender, their problems ran far deeper than the last line of defence. They played an uncharacteristically undisciplined game, far too many power play opportunities were provided by the Russians for Sweden and playing short against the Swedes is only a recipe for trouble.

In his book, Future Greats and Heartbreaks (shameless plug here, we are currently working on a review of it for our Top Shelf feature) Gare Joyce, recounts the thoughts of some European scouts that the Russians are no longer playing a team oriented game, instead its a style of game made up of individual players seeking to change things on their own, no more units of five moving up the ice, instead its all individual effort, seeking to be more of the star and less of the cog in the wheel.

Friday’s game against Sweden is pretty comprehensive proof that those scouts are on to something. There didn’t seem to be the same flow as past Russian teams have featured, pin point passing seems a long gone art, head manning the puck up the ice instead has been give over to desperate rushes that seemed to stop at the neutral zone. When you think back to the “Russian machines“ of tournaments past, their offensive schemes and set plays seem a long forgotten part of their program.
The Swedes had them figured out by the middle of the second period and by the third it seemed only a matter of time before Sweden would be making plans for a Gold Medal game. In the end it took about six minutes of extra time, but they finally put the Russians away and then sat back to see who they would match up with on Saturday.
.
A few hours later a rematch with Canada would be written down on the dressing room board, a game which should be an interesting match up of the two teams, with Canada looking to make amends for their only loss in the tournament and the Swedes looking to end 26 years of gold medal frustration.
Canada.com--Sweden off to world junior final
Winnipeg Sun--Swedes end medal drought
National Post--Sweden advances to final
Canoe.ca--How Swede it is
CBC Sports--Sweden crushes Russia's gold-medal hopes
Posted by . at 12:08 AM