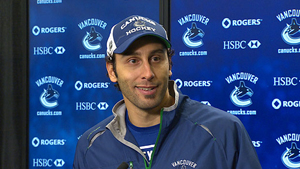 The Trade Deadline came and went and when all the trade calls had been verified by the NHL's Central Command, one Roberto Luongo was not packing up and shipping out from the West Coast.

The long running soap opera of Vancouver's own making, will now take an extended run into the spring, the length of which will be dependent on how long Vancouver can make a run in the Stanley Cup playoffs, providing they make it there.

That however is a story for another day, today, it's all about Roberto Luongo, hostage to a contract that pays him quite handsomely, but one which seemingly will have him stuck in his own personal Groundhog Day.

While goaltenders went to and fro, a Mason here, a Bishop there, a Kirpusoff, oh wait, never mind...

Roberto, the star of TSN sketch comedy (a pretty good routine by the way), twitter aficionado and pretty good goaltender to boot, remains with the Blue and Green, set to split the duties through the final month of the regular season and into the playoffs (wishful Canuck fans hope) with his sidekick in improv Corey Schneider.

It's not a horrid fate, the workload will be lighter than a starter might like, yet each win he may secure will be vital and if you're going to put in some time, working towards a Stanley Cup isn't a bad way to do it. Though, the Canucks did themselves no particular favour on that pursuit today.

The testimony to the nature of Luongo though came through pretty clear in his post trade deadline press conference, a most amazing event. A range of emotions from the goaltender, a glimpse into the humour we've come to discover through his twitter feed and the focus of pride that a player needs to have to succeed in the NHL.

He touched on many themes of the day and the lead up to the trade deadline, disappointment at the status quo, the reality of the fiscal anchor that his contract perhaps provides and a suggestion that he clearly wants to play and take on a leadership role, one that once was his in Vancouver but has ebbed over the years.

In what had been for the most part a rather tedious deadline day up until the frenzy of activity in the final hour, the Luongo bookend to the deadline day made for some fine theatre...

Upon its completion, the reviews were quick to the twitter world, the universal theme being that Luongo was a pretty classy guy, one who perhaps deserves a better hockey fate than what he's been dealt.

Then again, as more than one observer has noted in the last few days, pay day is clearly a pretty rewarding experience.

Still, hockey players want to play, Luongo has been successful in Vancouver in the past, clearly believes he can still be a starter and would like that chance. His team to a degree has created the mess that the Canucks find themselves in today, they'll have the summer to sort it out.

One hopes they find a path to avoiding the sense of fiasco that has been this most messed up season.

Some of the recaps of Luongo's day on the deadline watch can be found below.