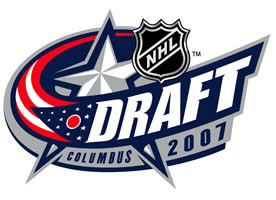 It's a historic day for the NHL, as American born players became the first two picks of the 2007 NHL draft. Selecting two high profile players 1 - 2 in the opening round of the draft.

The Chicago Blackhawks opened up the festivities by selecting Patrick Kane, who played with the London Knights of the OHL. Kane becomes the first number one pick in Blackhawk history.

The number two selection went to the Philadelphia Flyers, who selected James Van Riemsdyk of the US National team as their first round pick.
Posted by . at 4:31 PM