Big House for a Big Game

“It's Hockeytown versus the centre of the hockey universe,”  the sentiments of Brian Burke, the always loquacious  General Manager of the Toronto Maple  Leafs, with word of the next participants in the Winter Classic franchise. 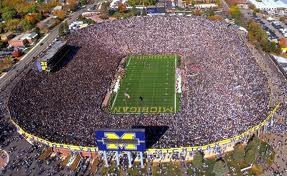 The Winter Classic 2013 is coming to the Motor City, well Ann Arbor to be exact, as the NHL announced on Thursday that their annual New Year's festival of outdoor shinny will feature two original six teams, the host Red Wings and the Toronto Maple Leafs.

The game to be played at the iconic Michigan Stadium, could very well draw in excess of 100,000 fans, setting a new record for outdoor games hosted by the NHL and no doubt making for a nice payday at the ticket window for Gary Bettman and the NHL accountants.

The NHL trumpeted the news in full on Thursday with a number of items posted to their website.

The Winter Classic which has become the NHL's showcase moment outside of the Stanley Cup playoffs, will be but one of a number of hockey related events in the Detroit area over New Years.

While the Illitch family may have surrendered the home field advantage so to speak, by not hosting the Classic at their own stadium at Comerica Park, they will feature hockey at the home of the Detroit Tigers as well, with NCAA college, Junior A and minor league affiliate hockey games and the NHL Alumni Showdown all planned to coincide with the Winter Classic at Ann Arbor.

The action at Comerica Park will be part of what is being called the Hockeytown Winter Festival and is anticipated to draw over 150,000 visitors to downtown Detroit during the lead up to the Winter Classic.

Of course with the big game comes the big exposure, with HBO no doubt ready to feature the Leafs and Red Wings in their 24/7 series, an event that already has more than a few NHL officials ready to pop some popcorn and settle in for some fascinating dialogue.

Bruce Boudreau's language and vocabulary classes will no doubt take place over the summer, so as to ensure a well prepared and relaxed class of 2013 in time for their close ups.

Flyers head coach and 24/7 alumnus Peter Laviolette already has tapped a potential Emmy award for Leafs coach Ron Wilson, who Lavilotette feels may steal the show.  Of course, it's to be seen if Wilson will be the main character or just a supporting one to Leafs GM Brian Burke, who has yet to meet a microphone and camera that he doesn't like.

Regardless, the bluster and the blarney and all the other b words you can think of will come to pass towards the end of the year, the hockey game itself comes along as the calendar turns over into 2013.