7.7 seconds to salvage a season? 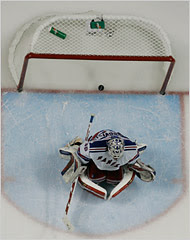 The Sabres made it a wild night in Buffalo Friday night, with as wild a finish to regulation time as you could hope to find. For most of the game, the Rangers and Sabres traded opportunities, body checks and face washes on their way to what looked like a long night of hockey ahead.

The Sabres continued with their over enthusiasm in dealing with the Avery factor, while the Rangers would revert to bad habits late in the third that would deny them a regulation time victory, set up the disappointment of overtime and make Sunday’s game in New York a must win for Broadway Blues.

The Rangers looked to be free and clear to a 1-0 squeaker over the Sabres, late in the third period when Martin Straka scored with 3:19 remaining, a goal that silenced the Sabres crowd and seemed to render the Sabers senseless. For a full two minutes they wandered the ice as if in a daze, unable to comprehend that they were in very real danger of not only losing the game, but perhaps of bowing out of the playoffs having handed the Rangers a 3-2 lead with Madison Square Garden waiting for game six.

Eventually though they managed to shake off that confusion and launched an attack in the Rangers zone, a wild frenzied bit of action that seemed to knock the Rangers on their heels. The Rangers couldn’t shut down the Sabres in the Ranger end of the ice, allowing them to pass without pressure, use the boards as they wished and fire off shots at Henrik Lundquist who once again played outstanding goal for the Rangers.

Once again it was a big play from Chris Drury which brought the Sabres back into the game, a snap shot that beat Lundquist with time running out, sending a tightly played game five into overtime.

As the extra period got underway, fate would provide for another lesson for hockey fans everywhere. Maxim Afinogenov, who found that his lethargic and mistake prone play had made him a healthy scratch in game four, became a hero of game five.

Afinogenov ended the game just before the five minute mark of OT, with a shot that eluded Lundquist and propelled the Sabres on to the 2-1 victory as well as providing an opportunity to eliminate the Rangers in their very own rink on Sunday.

The furious finish to the third period is indicative of the Sabres style of play for most of the season, no game is out of reach as long as there is still time left on the clock. 7.7 seconds was more than enough for Buffalo on Friday. In the amount of time it would take for a defenceman to flip a clearing shot down the ice, the Sabres managed to turn a game around.

The Rangers will have to decide on Sunday if it also turned around the series.
Posted by . at 12:19 AM