Buffalo on the brink of extinction 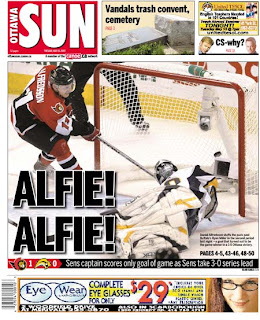 Game three of what the Buffalo Sabres can now only hope (and maybe now is the time for prayer as well) will be a seven game series, was dominated completely by the host Ottawa Senators. Only the magical goaltending of Sabres goaltender Ryan Miller, kept Monday night’s game from becoming possibly one of the most embarrassing losses in Sabres history.

Had anyone else rather than Miller been in the nets, there’s a very good chance Ottawa would have been celebrating a five or six to nothing victory. As it was, the 1-0 win, was much more flattering to the Sabres that reality should have provided for.

There was no aspect of this game (except for Ryan’s theatrics) where the Senators did not hold total control, from the outset of play Monday, the amazing play of captain Daniel Alfreddson provided proof as to how Alfredsson has become perhaps one of the most dominant two way players in the playoffs this season. He was everywhere in the play, fore checking deep in the Buffalo end, swiping away at stray pucks in the neurtal zone and then speeding to the goal crease to knock away one of the few dangerous opportunities that the Sabres could muster in a game they surely needed but exhibited no real sense of urgency in.

The captain is but one highlight in a continuous highlight reel of action, from his line mates of Spezza and Heatley, through the lines to the checking one, the Senators seem to be possibly just as dangerous at scoring on all four lines as they are on line number one. It’s the kind of performance that wears an opponent down, demoralizes them and can begin to set them off against each other. Missed assignments by the Sabres, sloppy play and frequent turn over’s gave the Sabres a poor deal on Monday, it was as though they were waiting for the deluge of Senators goals to finally put this one away.

Ray Emery almost had the night off, the shot totals laughably low from a team that normally is an offensive machine, power play opportunities were plenty for Buffalo, in fact a couple of times they were provided with two men advantages only to watch as the Senators played a formidable game of keep away. At what point in this series now does Lindy Ruff try and decline the penalty opportunities lest it continue to eat away at the collective minds of the Buffalo power play?

Defensively Ottawa has started to hit their stride, three solid lines of D men that can seemingly interchange with each other and not slow down the pace nor allow much in the way of opportunity for the Buffalo forwards.

Early on the Sens weathered the anticipated Buffalo assault, a fast and furious ten minutes at the start of the game that provided an early tease that this may be the pivotal game, one which would be robust hockey as both teams tried to score that first quick goal to set the other team on it’s heels a bit. Instead, it was a complete melt down on the power play that seemed to set the Sabres back, frequently shaking their heads as passes went astray, shots were gobbled up by sprawling defencemen or by an under worked but never the less fully attentive goaltender in Emery.

This most anticipated of series now has the aura of a quick and sudden ending coming its way, Buffalo will summon up some pride to try and avoid a sweep, but Ottawa has taken charge of this series and has more than begun to dictate the terms as far as the play goes.

All that may be left now, may be the final terms of surrender!

We’ll provide below, some links to some of the coverage of game three that we come across.

Email ThisBlogThis!Share to TwitterShare to FacebookShare to Pinterest
Labels: Sabres / Senators May 2007