It’s what it’s all about Alfie! 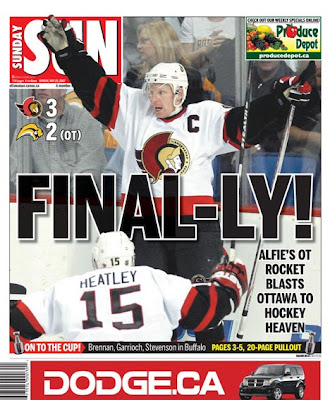 The Captain came through again, much like he has in three consecutive series, Daniel Alfredsson the Senators on ice general grabbed his team by the scruff of the neck and launched them into the Stanley Cup final on Saturday.

It was Alfredsson’s floater in the Buffalo end in overtime that found its way to the back of the net, crushing the hopes of the Sabres and their thousands of fans in and outside of the HSBC arena.

It’s been Alfredsson throughout the playoffs who has kept the Senators focused on their goal, when they get a goal down, when they stumble in their own end, inevitably it’s their captain who jumps onto the ice and leads them back to the other end. Usually with a positive outcome. There are few players who can give the Conn Smythe engraver a heads up in this playoff run so far, but if the Sens can make the final hurdle on their journey, there will be no better candidate for the MVP of the playoffs award that number eleven in an Ottawa sweater.

Saturday’s game, once again provided the kind of anxiety that Ottawa fans have come to loathe over the last few years. A battling Buffalo squad that took an early lead, held onto it for a fair amount of time and then reversed the Ottawa flow of the second and third periods to force overtime.

Penalties figured large in the Sabres comeback, the Sens taking five penalties in the third period alone. Two successive third period penalties to Anton Volchenkov and Christoph Schubert left the Sens to face a five on three, a situation that they handled quite well until the final few seconds when the Sabres Maxim Afinogenov picked up the required goal to send the game to an extra period.

It was a game that started out rather tentative in the first period, but finished in a flurry of rushes from end to end, scoring opportunities and game saving shot blocking from goaltenders, defensemen and forwards (just ask Chris Drury).

In the end, justice in a way was served for the Senators and their captain. It was last year when Daniel Alfredsson’s check got away from him and Jason Pominville put away the Senators on an unexpected goal.

This time it was the Sens captain who put to rest the ghosts of playoffs past, skating into the Buffalo end, somehow not attracting the attention of the three Sabres at hand and lofting his soft shot on and into the net behind the spectacular Ryan Miller, a player who perhaps deserved a better fate than the one provided in OT.

In a way it’s unfortunate that one of these two teams would end up eliminated, they are very much similar in their make up and their curses, though the Sabres have more experience with the near misses in recent history than the Sens. And by the end of play on Saturday afternoon, the Sabres had added one more bitter chapter to the book of what could have been.

With the captain’s winning goal, the nervous ones in the capital and the Sens fans scattered across the nation could breathe a sigh of relief, for the first time since 1927 an Ottawa team will be competing for Lord Stanley’s Cup. For those looking for destiny in their Stanley Cup storylines, it was eighty years ago that another Senators team won that fabled trophy, Ottawa fans will no doubt be crossing their fingers, wearing their lucky clothing and holding their breath for a similar outcome in 2007.
Snippets of coverage thus far on the Sens series clinching victory:
Ottawa off to Cup after winning Eastern Conference final
Alfredsson the overtime hero to lift Ottawa Senators into the Cup final
FINAL-LY
Sabres add more angst for suffering Buffalo fans
Ottawa in Cup finals
Senators off to Stanley Cup
Mission finally completed
Alfredsson a deserving hero
It's fitting that captain Daniel Alfredsson would score the overtime winner after all the scrutiny he's endured
Great for the fans
Ruff hopes team feels power of pain
Murray's happy at home
This has been a long time coming
Greektown or Disneyland? It doesn't matter to Emery
Game over for Sabres

Email ThisBlogThis!Share to TwitterShare to FacebookShare to Pinterest
Labels: Sabres / Senators May 2007