Game One Goat Horns for Getzlaf 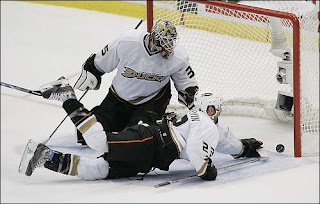 In a series as tight as the Wings and Ducks shapes up to be, it’s going to be a mistake that no doubt makes the difference as to which team is heading for the Stanley Cup final in two weeks or so.

Friday night, it was a lack of composure that proved costly; the Ducks Ryan Getzlaf took a retaliation penalty late in the third period, slashing out at the Red Wings Brett Labda, after the red wing had hit him first. But as the odds show, it’s normally the retaliation that gets picked up and proves to be costly.

Such was the case for Getzlaf who sat in the penalty box and watched the Red Wings release a flurry around the Ducks net, scoring a meandering goal that somehow ended up behind JS Giguere, providing a 2-1 lead and as things turned out a game one victory for the heroes of Hockeytown.

The goals were few and far between in the opening game of the Western final, The Wings and Ducks trading off on chances, while Domenic Hasek and Giguere staved off the attacks.

The Wings took an early lead at 3:44 of the first when Henrik Zetterberg put one away on the power play, the Ducks would return the favour in the second period picking up an even strength goal at 1.24 of the second frame from Chirs Kunitz.

Thing stayed that way until the latter stages of the third, when the Ducks Getzlaf took his penalty and the Red Wings Tomas Holmstrom made him pay the price for revenge.

The Wings took their share of bad penalties but the Anaheim power play just wasn’t up to the task on Friday night, too many opportunities slipped through their gloves in game one, perhaps a bug they caught from Vancouver in the last series, whatever the reason the inability to score on the Power play is something that you can’t deliver to the Red Wings.

The game was a chippy affair at times, including a couple of fights, something not normally seen in playoff hockey after the first round of action. Considering the Ducks were the most penalized team in 2006-07 and the Wings the least, it’s rather unfamiliar territory for the Wings who none the less were up to the challenge of the more physical brand of hockey that Anaheim brought to Michigan.

The Wings can expect more of the same in Game two on Sunday night, Anaheim will want to try and get even with the Wings for the California portion of the western final; however the road back won’t be easy should they allow the Wings time on the power play.

We provide some of the reports on game one from our journey through the wired world Friday night.

Red Wings strike first
Hasek stands succesful against Ducks
Ugly goals give Wings Game 1 win over Ducks
Hasek at his best
Holmstrom nets winner
How Swede
Penalty killers come through
Chippy style could remain
Dominator lives up to his name
Ducks: One that got away
Ducks blog: Advantage Red Wings
Posted by . at 11:44 PM

Email ThisBlogThis!Share to TwitterShare to FacebookShare to Pinterest
Labels: Red Wings / Ducks May 2007