Hard hits, hacks and attitude all the talk after game one 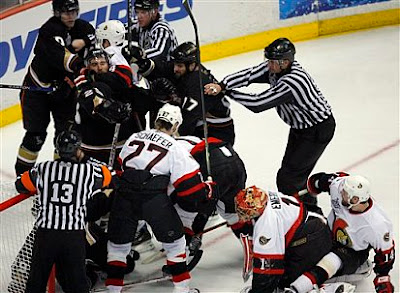 The tone of the coverage of Monday night’s game one of the Stanley Cup finals seems to be focusing on the image of the Ducks as a bruising and battering squad.

Many of the articles reviewing the events of Monday have been focusing on Burke’s Bruisers, a collection of hulking troglodytes that many seem to think are the reincarnation of the Philadelphia Flyers of the Broad Street Bullies days.

With the Ducks laying on a licking on the Sens through the third period, there are more than a few following the Stanley Cup trail that are wondering if the rules have once again been modified on the fly, gone are the obstruction fouls, the late hit calls and the attack on the crease calls of the regular season.

Perhaps it’s all a bit of gamesmanship on the part of Ottawa to get the refs to follow the play more closely, but there is a bit of truth to the idea that the rules did seem to change dramatically as the game progressed, most noticeably in that third period, an twenty minute period of play that would have brought a smile to the face of Gary Dornhoffer.

If the refs do crack down on the rough stuff for game two it could very well mean the end of the Ducks style of play, even in Monday’s game they found themselves in the penalty box frequently, leaving Ottawa to a power play that occasionally showed signs of life but far too often just as often sputtered.

Perhaps the best way for Ottawa to make the Ducks gentler, might be to score a few more times on the power play and make them pay for their misdeeds often.

We highlight some of the roll call of the shocked, who found Monday night to be an unusually violent night.

Email ThisBlogThis!Share to TwitterShare to FacebookShare to Pinterest
Labels: Ducks and Sens 2007 finals