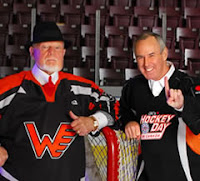 On Saturday, Winkler, Manitoba becomes the centre of Canada’s hockey universe, that’s when the CBC will begin broadcasting its 13 1/2 hour marathon of all things hockey, in the eighth edition of the national love in known as Hockey Day in Canada.

Four games are set to be broadcast in three time slots, minor hockey players across the country are set for their brief moments of fame and countless heartwarming stories of the love of the game will be told before the screen fades to the late night movie.

In between all of that drama, CBC’s army of broadcasters will scour the nation seeking out the tidbits of Canadianna that make this effort one day long festival of winter’s game.

No CBC Canadian hockey event would be complete without the iconic Donald S. Cherry in attendance, and this apparently has the Globe and Mail concerned that the patriotic Cherry may find some bones to pick with the large population of Russian extraction, which went so far as to make sure that the 1981 Russian national team received a replica of the Canada Cup trophy, when Alan Eagleson refused to let them take the original home with them.

Of course, when you have over 13 hours of television to fill, a little drama probably helps to keep the audience curious, so the great what will Grapes say over/under is now on.

Live reports are planned from Duncan, B.C., Black Diamond, Alta., Cochrane, Ont., Ottawa, Saint-Jean-sur-Richelieu, Que., and New Glasgow, N.S , there will also be four taped presentations to be shown during the broadcast.

As for the games, in its marketing wisdom, the NHL somehow couldn’t organize a schedule that saw all six Canadian teams play each other on the same day, so while four out of six games will be all Canadian match ups, two will feature American teams with Canadian links. In addition to the Senators and Habs and Flames and Oilers, the Leafs will play the Detroit Red wings who have a sizeable fan base in Southwestern Ontario. While the Colorado Avalanche will play the Vancouver Canucks, though it’s doubtful that the Avs lineage from their Quebec days carries much weight anymore.

Winkler has been preparing for their big day for months, with a core group of volunteers going the extra mile to make sure that they play the host for the invading army of CBC types.

While they can handle pretty much anything that the CBC may throw at them, one thing will be beyond their reach. Winkler is a dry town, with no licensed premises in the town limits.

Meaning if Don Cherry wishes to take his new found comrades on Winkler for a pop, he’ll have to take them on the road and have a designated driver of course!