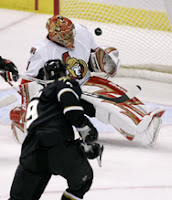 Things appear to be on the boil in Ottawa these days as Ray Emery once again finds himself under the microscope after a couple of interesting incidents during practice time in Kanata.

Judging by the theatrics of the last few days, it would seem that Emery isn’t particularly partial to practicing and isn’t finding his status as second choice on the bench to his liking either.

Relegated to spot duty of late, media reports had Emery lashing out at some unfortunate water bottles on Thursday during the Sens practice and then reporting with just minutes to go on Friday.

The Friday situation resulted in his being sent home, owing to illness according to the press release out of the Sens offices.

Emery who was the go to guy during last years Stanley Cup run, was still recovering from wrist surgery at the start of the season and has been plagued by minor injuries and conditioning concerns during the first months of the season.

While he has found occasional nights in the nets this year, for the most part the call has gone to Martin Gerber who has quickly won the support of his Senator team mates who have said as much in recent days as the Emery outbursts became better known.

By Friday afternoon, the Toronto radio stations and sports networks based out of that city were rubbing their hands in glee with an apparent controversy percolating in the capital. Panel discussions weighed the pros and cons of cutting the Sens goaltender loose and contemplated how big a distraction it all may prove to be for the Sens currently riding a hot streak atop the Eastern Conference.

There hasn’t been much made out of the outburst in Ottawa itself, the players seemingly circling the wagons and keeping their comments close to the dressing room, with the occasional nod in favour of Gerber who has simply just gone out and done his job night after night.

The unsaid suggestion (and in a few cases the openly stated commentary) is that if Emery wants to get back to his form of last year, he needs to put in the effort on the ice. Something that apparently won’t be accomplished by knocking water bottles around and showing up late for practice.
If he's indeed trying to force the Sens hand into a trade situation as some suggest, he's probably approaching it all wrong. Besides looking out of shape and not very sharp on the ice, he's developing a bit of troublesome reputation, something that many GM"s may wish to pass on.
At the start of the year many suggested that Ottawa was going to have a problem in the nets this year, with two quality goaltenders needing plenty of ice time. Originally it was surmised that Gerber was going to be the one to be moved, but as the season has progressed and with the recent excitement that dynamic may have changed.
It might be better to quietly go about getting back into that playoff form of last year and then the Senators might be able to accommodate him, more importantly the phone calls will be a lot easier to make if he's concentrating on hockey and not hissy fits.
Canwest news--Senators growing weary of Emery's antics
Canwest news--Emery Needs To Practise Harder: Paddock
Globe and Mail--Sens go on without Emery
Ottawa Citizen--Emery a no-show at Friday's practice
The Sun papers--Emery's exit imminent?
The Sun papers--Plot's sickening
CBC Sports--Ray Emery saga continues on
Posted by . at 12:37 AM