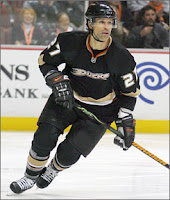 A Joe Thornton shoot out goal spoiled the good vibe feelings in Anaheim on Sunday, as the San Jose Sharks squeaked by the Ducks 2-1.

It marked the first game for the former Duck captain since he last hoisted the Stanley Cup high in Anaheim's Stanley Cup victory lap at the expense of the Ottawa Senators.

After a summer and fall of deliberations, Niedermayer rejoined the team a few weeks ago and finally was game ready to take to the ice on Sunday.

His play was reported to be fairly consistent, with little rust showing after his extended summer vacation.

Also lost in the Shark victory was the debut of Doug Weight in a Duck's uniform, part of the maneuvering to bring Niedermayer back into the Ducks nest, was the need to drop some salary which the Ducks did with a trade with St. Louis sending Andy McDonald to the Blues in return for Weight.

On Sunday Weight showed his new home town fans that he may be a solid factor in upcoming Duck games, assisting on the Ducks only goal of the game as he sent a cross ice pass over to rookie Bobby Ryan for the Ducks marker.

While it may take a few games for both Niedermayer and Weight to become more familiar with the Ducks play, they will certainly in the long run prove to be solid additions to the defending Cup champions.