Sid and the other kids, don’t measure up to the Spice Girls 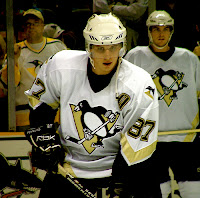 Sure he’s the hottest ticket in the NHL at the moment, but in the world of ticket scalping the arrival of Sidney Crosby and his traveling band of fancy skating hockey players just can’t compete with Posh, Baby, Scary and all the other lasses of the Spice Girl tour.

Less than a week after the Girls of pop took over GM place, the boys of puck are having a hard time making a buck for those with tickets.

"Demand isn't as high as I'd like," said Kingsley Bailey of Vancouver Ticket and Tour Service on Beatty. "For a walk-up I believe you'll have no problem getting a ticket [upper bowl] for $125."

Alas, fame perhaps can be fleeting, at 125 bucks on the scalpers market, that’s 375 dollars less than the going rate last week for a chance to ogle the Spice Girl revolution.

Perhaps its because of the age factor, the Spice Girls moving along in their years may not be back for another look, while the rather young and still evolving Pens will now be back far more frequently in the past.

Or maybe the Pens need a few songs to go with their show, a Nova Scotia kitchen solo for Sid, a duet for Malkin and Gonchar rekindling those ancient songs of Mother Russia and some good old Quebecois renditions from Fleury and Talbot.

A little song, a little dance and maybe a few goals and who knows, the scalpers may one day find that Sid commands a posh like price too.
.
The Vancouver Province had the tale of the hockey star that ain't no pop star yet, on its website on Thursday..

Sid the Kid is no Posh Spice.
Evgeni Malkin, Jordan Staal, Ryan Whitney and Marc-Andre Fleury apparently don't measure up to Scary, Baby, Ginger and Sporty.
While a few scalpers got as much as $1,000 per ticket for lower-bowl seats to the Spice Girls concert at GM Place, Sidney Crosby and the Pittsburgh Penguins are commanding a bit less than that for the best seats.
"Demand isn't as high as I'd like," said Kingsley Bailey of Vancouver Ticket and Tour Service on Beatty. "For a walk-up I believe you'll have no problem getting a ticket [upper bowl] for $125."
.
The fact it's close to Christmas and that the NHL recently announced Eastern teams will now appear every second year have dampened demand. Asking prices for good seats to the Spice Girls wound up finding equilibrium at about $500. So, too, have prices dropped for the Pens game.
Some on craigslist were trying to get $2,000 for club seats earlier this season but prices found their way down. They now range from $100 (upper bowl) to $950 (a pair of club seats with parking thrown in).
Posted by . at 1:23 AM

Email ThisBlogThis!Share to TwitterShare to FacebookShare to Pinterest
Labels: Sidney Crosby on tour