Backstrom Brings in a win for Boudreau 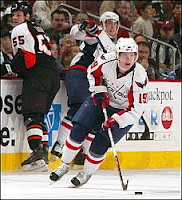 Washington Capitals rookie Nicklas Backstrom welcomed his new coach into the NHL by providing the winning goal in overtime, to give the Capitals their first win, in their first start under the Boudreau era.

While the Capitals of old seemed to rise up in the third and try to hand the victory over to the Philadelphia Flyers, when the game went into overtime, the Caps went into overdrive.

Backstrom combined with Alexander Ovechkin to put away the winning goal, Backstrom recovered a shot directed by Ovechkin at the Flyers Martin Biron, and waited a second for the goaltender to commit before he tucked away the winner.

It allowed all of the Caps and their interim coach to take a deep breath and forget about a 3-0 lead that they blew starting in the second period.

It was an emotional win for the struggling Caps, who yesterday saw their popular coach Glen Hanlon dismissed by the Capitals management, with a bottom dwellers record the Caps have been fairly woeful for a good portion of the season. So getting off to a 3-0 lead in Philadelphia must have felt like a trip to Oz.

Of course this being a Capital’s story, the tide soon turned as the Flyers began to put the pressure on in the second and started their trek towards a tie and the chance to win in OT.

The Flyers found themselves in the middle of bit of melee in the waning minutes of the second period as Scott Hartnell, laid out Boyd Gordon with a legal, but rather shuddering shoulder check to the head in open ice.

It was a check that the Caps captain, Chris Clark took exception to and he took on Hartnell in a fight, which found Hartnell in the penalty box for a total of 19 minutes in penalties. Two were for unsportsmanlike conduct, two for instigating, five for fighting and he was assessed a 10-minute game misconduct. The unsportsmanlike was assessed because he initiated a fight while wearing a visor.

While his captain was lost to the team for almost an entire period, the Caps coach Boudreau had no problem with him sticking up for a team mate, who found himself on the wrong end of a nasty check.

Perhaps it was a sign for Boudreau that his new team is willing to get bloodied a bit, in order to send a message that they are involved in the game and will not be pushed around while they’re down.

Between the leadership of the captain and the scoring touch of the rookie, Boudreau might be thinking that his new situation is not only salvageable, but that there may be some hope for the Caps after all, though one suspects that expectations should not be raised too high.

The fans back home in Washington will no doubt be pleased with the result and especially at the expense of the Flyers, who find they rub most team’s fans the wrong way in every city.

So far Boudreau is undefeated, granted it’s only after one game, but considering the season so far, they’ll take the two points and keep an eye on the standings for some upward movement to come.