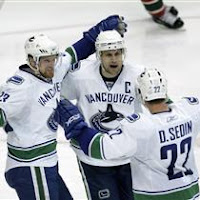 "Maybe I can go after, or check Naslund and those Pinky and the Brain twins,'' --- Derek Boogaard, earlier this week.

Markus Naslund and those “Pinky and the Brains twins”, made quick work of the Minnesota Wild on Wednesday night, as the Canucks who left Edmonton late on Wednesday and arrived in the Twin Cities early in a Minnesota morning on Wednesday, seemed rested enough to more than handle the Wild.

Naslund accounted for three of Vancouver’s four goals on the night, the twins picking up two assists each as the Canucks doubled the Wild 4-2. Good enough to move the Canucks into a first place tie with Minnesota in the Northwest Division.

Coach Alain Vigneault turned Boogaard's comments around, as he praised his club for coming to the rink focused on the hockey and able to put aside the sideshow aspects of the Minnesota enforcer.

Boogaard didn’t even get the opportunity to get on the ice much, let alone into a scrap, according to the NHL's Time on Ice stats, he played for less than four minutes in the first two periods of the game. The lone fight of the game featured the Canuck’s Mike Brown, recently called up from Winnipeg who got into a scrap with the Wild’s Aaron Voros in the first period. The first period was a scrappy affair, but the remainder of the game was fairly calm, with no penalties at all called in the third.

The Wild were left to ponder letting a four game home game winning streak come to an end as they surrendered the two points to a less than intimidated Cancuk squad. Vancouver played Curtis Sanford in goal, giving Roberto Luongo a rest from last night’s long evening in Edmonton.

The rejuvenated Naslund is a welcome sight for Canuck fans, struggling in the early part of the season he has become a much more focused player since being re-united with Daniel and Henrik Sedin. They are a first line that is finding the net much easier these days and able to silence the silly talkers rather easily.

Considering the angst around Vancouver a few short weeks ago, the Canucks have more than risen to the occasion, no excuses over serious injuries, no panic when things start to turn band and providing an exciting and hard hitting display of hockey.

For Canuck fans the bandwagon once again is taking on passengers, but the space is going fast!
.

Email ThisBlogThis!Share to TwitterShare to FacebookShare to Pinterest
Labels: Canucks in Minnesota