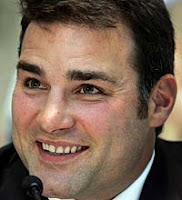 As expected, Eric Lindros announced his retirement Thursday, hosting a press conference in London, Ontario where he recounted the enjoyable moments and the frustrating ones of a frequently interrupted 13 year NHL career.

As a way of saying thank you to the medical professionals that kept putting him back together over the years, Lindros presented a five million dollar cheque to the London Health Sciences Foundation, home to Doctor Peter Fowler, a sports medicine specialist and one of the main doctors involved in treating many of the injuries that marked Lindros’ career.

It was a fascinating press conference to watch clips of, a much more relaxed Lindros went over the obligatory moments of his career, from his early days with the Flyers and their Legion of Doom, through his slightly less controversial (and less successful) days with the Rangers, Leafs and Stars.

But his fondest memories and most haunting moment seem to involve those days that he wore a Team Canada uniform, whether it was at the World Junior Championships or skating one on one against Domenik Hasek, a showdown won by the Czech and a moment that seems to still seem fresh in the Lindros mind to this day.

His career was a controversial one, feuds seemed to gain as much ink and television time as his scoring plays did, he famously rebuffed the Quebec Nordiques the team that originally drafted him, though he was at pains to explain that it had nothing to do with the city, or the culture of Quebec, but rather an impression that the management there was not willing to put a winning team on the ice. It’s his version of history that probably won’t win too many converts in Quebec City on his retirement day, but as always he didn’t hold back when it came time to speak out about the issue. His one regret of those controversial times was that he didn’t better communicate his thoughts to the province’s rabid hockey fans.

His famous injury plagued career came in for a subtle bit of humour from the guest of honour, suggesting that perhaps he should have learned to stick handle a bit better with his head up, a nod of the much discussed head to the many concussions that he suffered in his thirteen year career. His acknowledgement of his doctor and the London Health Sciences Foundation is indicative as to just how much he realizes that his career took many twists and turns medically, robbing him of possibly some of his most productive years.

It’s that record of injury that many say should keep him out of the Hockey hall of Fame, a hockey shrine that he becomes eligible for in 2010. Despite some pretty impressive numbers when healthy, some hockey observers suggest that he never really had enough time to prove his worthiness for the Hall.

While there may be some validity to their point, there also seems to be a sense of payback involved in those comments. Lindros rubbed people the wrong way in his early days, a self assured (and over parented) hockey prodigy, there is a strong number of people who feel he never really had to prove himself, that too often he just got what he wanted through stubbornness.

It’s a debate that will rage on for the next two and a half years until they make that announcement as to who will be enshrined in 2010. When you take into account his international experience, his dominance of the game when he was healthy and his current fascination in making the NHLPA more accountable to its members, he should probably qualify for inclusion to the Hall. After all, they don't give out Hart and Lester B. Pearson trophies, or all star nominations to just anyone, you have to earn your way onto those trophies and lists, surely a point that the Hall of Fame committee will consider on nomination day.

There’s no shortage of rogues who didn’t get along with their managers or the media already there, some of whom probably had less talent than the oft injured Lindros. While he certainly didn't win over many in his early days, his farewell showcased a mature and well spoken man, secure in his past and more than aware of the controversies that flew around him.

His next move in hockey could very well be with the NHLPA, the associations thirty team reps will hold a vote on Sunday to determine if Lindros will become their ombudsman. It was a prospect he touched on during his retirement address, reciting the names of Ted Lindsay and Carl Brewer, both members of the NHL who fought the good fight against less than open minded management of the times.

Lindsay is a well respected member of the Hockey hall of Fame, don’t bet against the last rabblerouser to join his ranks in a couple of years.
As could be imagined his announcement found no shortage of coverage in the hockey world, some of which we provide below.
Canadian Press--Lindros announces retirement from NHL while making $5-million donation
Canadian Press-- Lindros rankled many fans over the years
Sports Illustrated--Victim of expectations
Philadelphia Daily News--What we learned from Lindros: Don't get your hopes up
Philadelphia Inquirer--Lindros' legacy: Another savior who didn't save
Canwest News--Lindros mistakenly thought he was invincible
National Post-- "Itwas a blast"
ESPN.com--Is Eric Lindros worthy of the Hall of Fame?
ESPN.com--With Lindros, nothing was a given
Globe and Mail--Lindros was different from Day 1
Toronto Star--Lindros worthy of spot in hall? Tough call
CBC Sports--Eric Lindros is a Hall of Famer: Clarke
London Free Press--No regrets
Montreal Gazette--Lindros legacy cut all too short
TSN video--NHL panel discussion: Should Eric Lindros be in the hall of fame?
Posted by . at 12:24 AM